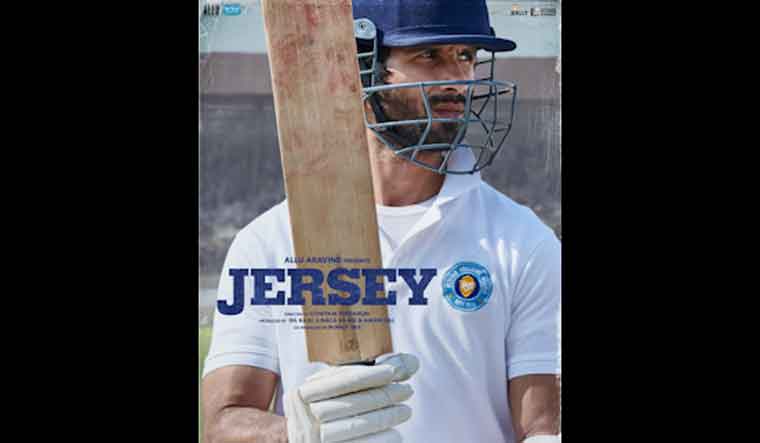 This is the larger point that Jersey, a Gowtam Tinnanuri directorial makes, but falls flat while doing so. The film is so mind-numbingly slow and stretched (172 minutes) that it makes you want to either leave or take a snooze. A remake of the 2019 Telugu hit of the same name and by the same director, Jersey is based on a fantastic storyline - a zappy comeback of a once-successful cricketer who is now well over his prime. But the lacklustre execution and vapid delivery end up testing one's patience.

That Shahid Kapoor, who was last seen on the big screen in and as Kabir Singh, maintains the same bearded look, dressing style and stone-faced expression throughout the film further add to the disappointment. In the character of an exceptionally talented Ranji player Arjun Talwar, Kapoor plays the role of a failed cricketer at 36 who is also a loving husband and a doting father. Having been diagnosed with Arrhythmia at 26, he is forced to give up on activities that demand physical exertion, and this includes cricket. As a result, he settles down to an everyday life around a government job with the Food Corporation of India until that too, falls apart. He soon finds himself unemployed and frustrated at leading a purposeless existence and being unable to provide for his family. Jersey is a scene-by-scene copy of the original, yet, it lacks the dynamism of the former.

Yet, one thing that doesn't fail to pull at the heartstrings is the chemistry between Arjun and his son Kitu, essayed by the very charming Ronit Kamra. The emotional turmoil Arjun goes through when he is unable to fulfil his son's wish for an Indian team jersey, for the lack of money, will move one to tears. Arjun's wife Vidya Talwar (Mrunal Thakur) bears the financial burden of the family and in that character she seems unquestionably relatable.

Despite using cricket as the sub-plot, the film fails to grip and engage. There is absolutely no humour; in fact, going by Shahid Kapoor's staid expression and monotone delivery, the film at best manages to depress the viewer. The jokes, which can literally be counted on fingertips, all fall flat. In the role of Arjun's coach Madhav Sharma, Pankaj Kapur who is also Shahid's real life father, seems natural and believable. He delivers an exceptionally appealing performance as a coach who tries to pull his pupil from the drudgery of a morose life and places him in the centre of the action - the cricket stadium.

While the first half is dedicated to Arjun's struggles to try his best to unsuccessfully provide his son the jersey he wants, the second half focuses on the game but fails to hold attention. The dynamics of the relationships between a father and son, husband and wife, player and coach, could have been better fleshed out to make them endearing. The backdrop of Chandigarh and the Punjabi touch present across the film adds the much-needed zest and zing to the narrative. While Mrunal's chemistry with Shahid isn’t superlative, it does not look forced at any point. Yet, the relationship dynamics could have been emphasised more for nuance.

Kamra is the only delightful takeaway from this otherwise bland film, given his delightful and endearing scenes with his father Arjun. The scenes on the cricket field have been shot well and stays true to the sports drama genre it belongs to. Only if the film itself would have been infused with some life and energy.