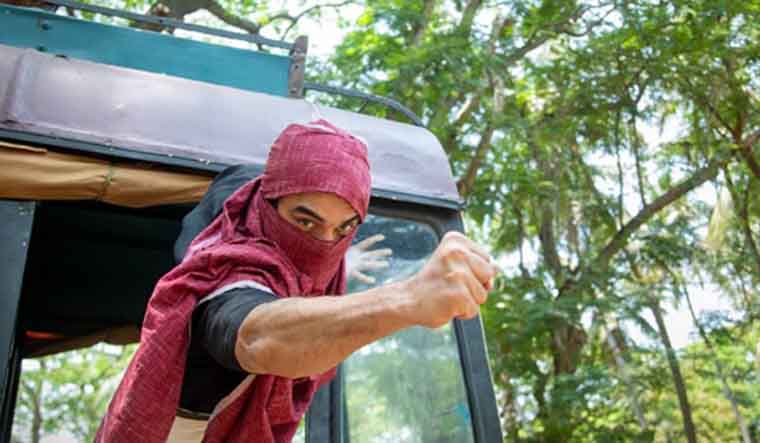 Malayalam cinema has always been noted for its realistic scripts and portrayal of characters. The reach expanded with the rise of OTT platforms, in the backdrop of COVID-19 induced shutdown of theatres. National and international audience doffed their hats to many a film.

So, when Malayalam cinema’s first superhero flick Minnal Murali was announced, naturally, eyebrows were raised. Superhero films have never really taken off in India. Reasons range from ‘inspired’ and un-desi storylines to shoddy VFX, and more.

Director Basil Joseph seemed to have learnt from others’ mistakes. With promising young star Tovino Thomas at the helm, the makers pulled out all stops to market the film. But Minnal Murali is not all marketing blitzkrieg. First and foremost, the film (or should we say, franchise?) tries to walk before breaking into a run. Literally. The story is set in a nondescript and fictional Kerala village Kurukkanmoola from a bygone era, which has its share of quirks. Jaison (Tovino) and Shibu (Guru Somasundaram) acquire superpowers are being hit by lightning on the same night. They follow their own paths before destiny brings them face to face.

What works for Minnal Murali is its self-effacing humour and local flavour. Not once, except in the climax, does it try to ape the Hollywood superhero flicks or its Bollywood rip-offs. Sample this: Minnal Murali makes his first public appearance in a mundu (dhoti) and shirt, and wearing rubber slippers and a bird mask. Again, in the first face-off between the hero and the villain, their masks and ‘costume’ are as rooted as it can get. Also, the situations that make Jaison and Shibu do what they do, are a reflection of the society everywhere.

Minnal Murali may remind one of Spiderman (the Tobey Maguire one) because of the underlying emotions, a simple storyline and an extremely endearing protagonist. Tovino fits the bill perfectly. He has the physique and the charm to pull it off. It is his second venture with Basil Joseph, after the superhit Godha.

The surprise package might be Guru Somasundaram as Shibu the antagonist. Well, not so if you see his filmography, which has gems like Aaranya Kaandam and Joker. The pain in his eyes is haunting. Yes, his actions cannot be justified. Yes, he is evil (in fact, the evil persona is almost forced upon him unnecessarily in a couple of places). But one may be forgiven for empathising with him.

The supporting cast, too, lift the film. Be it veterans like Mammukoya, Harisree Ashokan or Baiju, or newbies like Vasisht Umesh and Femina George.

Which brings us to the female characters in the film. Joseph and his scriptwriters Arun Anirudhan and Justin Mathew try to balance it out with ‘Bruce Lee’ Biji (Femina) at one end and Usha (the extremely talented Shelly) and Bincy (Sneha Babu) at the other, but all are, in one way or the other, stereotypical. But is it too different in the real world in the era being referred to?

Technically, Minnal Murali is a winner. And so is the music by Sushin Shyam and Shaan Rahman, especially the catchy BGM.

The show has just started and there are ample signs of more to come. Will the novelty wear off as the franchise spreads its wings beyond Kurukkanmoola? Or will the Basil-Tovino duo spring more pleasant surprises.