‘Bunty Aur Babli 2’ review: The sequel manages to get some laughs

Rani Mukerji is the star performer in the movie 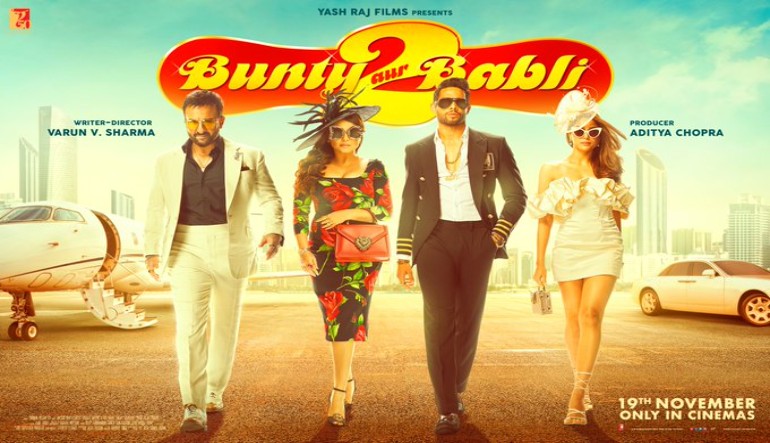 A complete comedy entertainer that focuses only on making you laugh without any regard for logic, that is what Bunty and Babli 2 is. A sequel of 2005 hit movie Bunty Aur Babli, the film is insipid, saved only by the comic timing of the actors.

The sequel is a game of one one-upmanship  between the pros in this game (original Bunty and Babli) and the new con artists. The new generation couple shines in the first half, and the second half belongs to the veterans.

The movie starts in 2021, and Vimmi (Rani Mukerji) along with her son and husband Rakesh (Saif Ali Khan) leads a peaceful life, away from their life of trickery. They are now focused on their child, and crime has no more part in their lives. While Rani-Saif pairing is enjoyable, it would be be unfair to say the original Bunty (Abhishek Bachchan) was not missed.

The story takes a slow turn when a new con couple (Siddhant Chaturvedi and Sharvari) starts looting and tricking people under the name ‘Bunty and Babli’. From coning some with fake passports to leasing river Ganga, the new ‘Bunty and Babli’ become a headache for the police department.

The police arrest the Vimmi and Rakesh, but soon realize that there is a new con couple in town.

Rani Mukerji is the star performer in the movie. From dressing in loud colors to bringing back the 90's looks with a modern touch, the actor has managed to create quite a few chuckles. Saif too manages to keep up with her, and together they are fun to watch. Siddhant Chaturvedi too comes up with a credible performance.

While the film pales in comparison to the 2005 predecessor, it manages to entertain, thanks to the comic timing of the lead actors.