The long and loosely written screenplay lets down the film 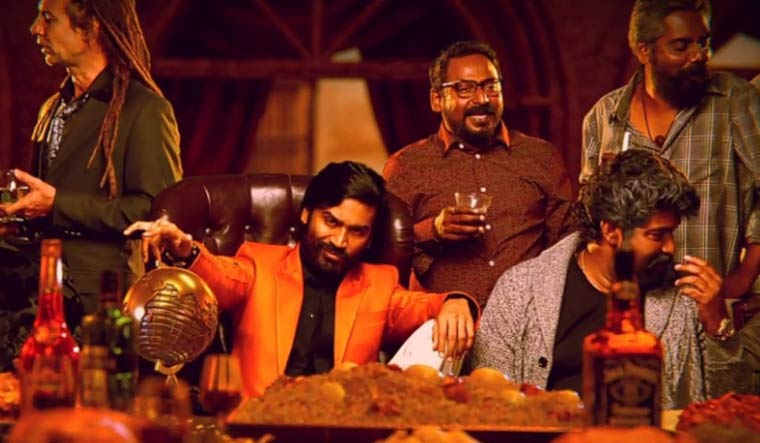 The film opens in London where members of two gangs fight it out. A key member of a gang headed by Peter is bombed by the members of rival gang headed by Sivadoss. Peter, played by James Cosmo, is a racist gangster who spearheads illegal activities in London. Sivadoss, played by Joju George, is a Tamil smuggler who also helps Sri Lankan refugees get permanent citizenship in foreign countries. The two are arch-rivals, and Peter wants to eliminate Sivadoss and stop his refugee cause. So, he hires a Tamil rowdy from Madurai—Suruli, played by Dhanush—to kill Sivadoss.

There are guns and much bloodshed. But, Jagame Thandhiram fails to discuss the immigrant politics or the Sri Lankan Tamil refugee cause or even a simple gang war between two gangsters. Treason is central to Jagame Thandhiram, but the weak screenplay and script never really explores it fully.

Dhanush as Suruli, is quite entertaining, be it in London or in Madurai, with his uncanny humour. But, there are questions director Karthik Subbaraj doesn't answer or situations which are unconvincing, and it's a major letdown.

Aishwarya Lekshmi, as Attila, plays the role of a Sri Lankan immigrant struggling to get permanent citizenship, and she is the one who makes Suruli aware of the problems immigrants face.

James Cosmo as Peter has managed to invoke disgust in the audience with his cuss words, gait, and behaviour. But Sivadoss by Joju is downplayed.

The entire 158 minutes is quite noisy, but fails to deliver any strong message.

Santhosh Narayanan's background music is quite entertaining. The rakita rakita rakita... number by Dhanush stands out.

But if you think Dhanush’s handlebar moustache will bring you back Petta on screen, you will definitely be disappointed.