'Sardar ka Grandson' review: Arjun Kapoor is the only saving grace in this chaotic affair 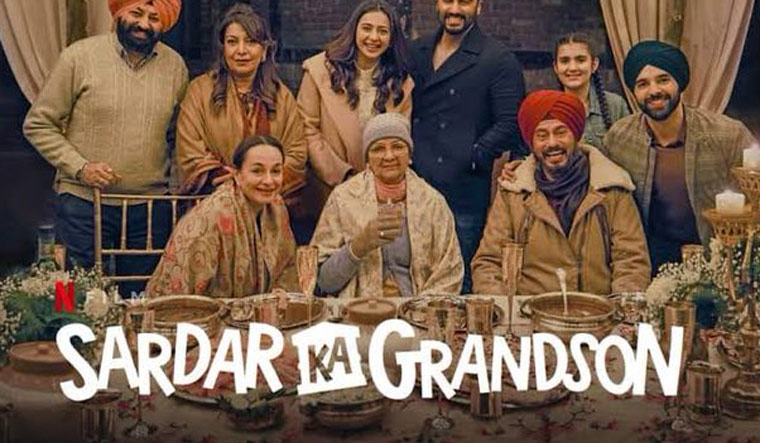 Ninety-year-old Sardar Kaur (Neena Gupta), a boisterous industrialist, yearns to go back to her roots in Lahore, which she had to flee during Partition, to settle in India's Amritsar. She suffers from a life-threatening disease, and her only desire is to revisit Lahore "just once" to check out the two-storey home she had built with her husband, and she pledges her "will" to her grandson Amreek (Arjun Kapoor) if he agrees to help her fulfill her last wish.

The problem is that Sardar is not permitted to travel to Lahore after getting blacklisted due to her anti-Pakistan antics during a cricket match in Mohali. So, what does the grandson do? He decides to relocate the house instead. If she can't go to Lahore, the house there can come to her. After all, Amreek—who comes across as dull, clumsy and irresponsible—used to run a transport and logistics company back in Los Angeles, albeit unsuccessfully, before he came down to India to visit his ailing grandma. What follows is a sleep inducing, extremely boring and a lacklustre drama revolving around Amreek whose only ambition in life is to prove himself worthy in the eyes of the world, after demonstrating boorishness that is typical of a pampered brat and stupidity that stems from a misplaced sense of arrogance and self-aggrandisement.

However, within the limits of this character definition, Kapoor stands out. He comes across every bit the Amreek he plays and he does that with panache. What works against him are the below average dialogues and a sloppy script, both of which take away the intensity and gravitas out of the film. Rakul Preet Singh as Radha hardly creates a lasting impact other than looking ravishing in every frame. Amreek's parents (Kanwaljit Singh and Soni Razdan) have little to offer in terms of acting. While Neena Gupta's character as Sardar—the fun, whiskey loving, impish granny who chats and chills—is beautifully scripted, the screenplay takes the punch away from the character. Despite trying hard, this granny doesn't really pull at your heartstrings or get you to fall in love with her.

It so turns turns out that Sardar's house has been passed over to a Muslim man who left his own property back in India to move to Pakistan after the Partition. There is no doubt that the plot is refreshing and novel, but it fails to keep the viewer hooked. For instance, one feels no connection to Sardar's emotional upheaval when she sees her house, years after the Partition. The film comes across as chaotic, with loose threads here and there. Arjun Kapoor is the only saving grace, that is if you really manage to be impressed with Amreek in the first place.