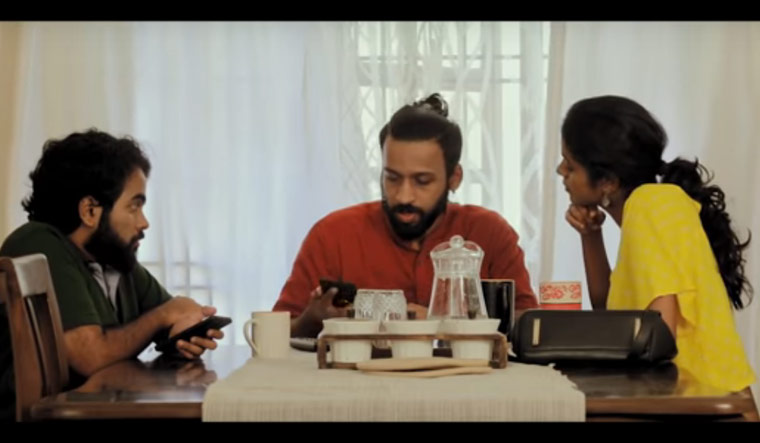 A still from the film

The short film The Discreet Charm of the Savarnas immediately springs to mind the title of a once popular web series with multiple spin-offs: Shit Girls Say. When three "woke" upper caste friends from south Bombay, in their desperate attempts to find a "Dalit-looking person" for a film due to go on the floors the next day, bumble along revealing their inherent biases, it is almost like 'Shit Savarnas Say'. In a way, film critic and director Rajesh Rajamani in his 21-minute film is highlighting how the caste-conscious can also be caste-blind, how virtue signalling and the moral superiority around "social justice know-how" is great performance but nowhere near any meaningful engagement with the historically oppressed.

Triggered by a 2018 casting call on Facebook "for an actor who looks Dalit”, Rajamani has aptly referenced the 1972 French comedy The Discreet Charm of the Bourgeoisie in the title of his short film which dropped on YouTube last month. The Discreet Charm of the Savarnas is also an attempt flip the template of poverty, humiliation and extreme violence as framing devices for caste-based stories in popular media. It uses humour and satire to gently poke fun at the caste-blindness of the young and well-read in urban milieus and holds a mirror to the "upper-caste gaze". Played out to the accompaniment of sweet, lilting, harmonica-inflected soundscape created by Imphal Talkies, the mood in this comedy of manners is laidback and breezy.

The opening credits set the tone by showing a famous vintage poster of Pears' Soap as a comment on colonialism through the cleansing metaphor, suggesting how the colonized were unlcean and it was the White Man's burden "in brightening the dark corners of the earth" through the soap. The three friends flit from one scene to the next exchanging repartees and funny stratagems. The female protagonist Aruna constantly takes offense at the flippant use of the word "B****" by her anxious male friend and cribs how every man on Tinder boasts he is either a sapiosexual or a feminist. But in the next scene Aruna can't understand the difference between a Dalit actor and an actor playing a Dalit character. In the friends' conversations around casting, a Dalit person can't look too sophisticated or too middle class or lower middle class. They need someone who looks "more Dalit" than that. When they meet a "real Dalit person" in the film, it takes them by surprise.

The film released around the same time when news of the Hathras gang rape and murder started gaining traction and exploded into the national limelight. Last week, while returning from a reporting assignment to the village where the horrific crime took place, a friend sarcastically remarked, "Hope the Savarna guys were not there". Vicious caste violence in the badlands of Uttar Pradesh is far away from the embarrassing casteism of three pretentious friends who can easily detect casual sexism and anti-Black attitudes. But the ubiquity of caste prejudice in varying degrees at both ends of the divide—urban and rural, educated and not—continues to feed into each other.