'Panchayat’ review: A peek into India’s hinterland, sans the overdramatisation

The 8-episode series, created by The Viral Fever, is streaming on Amazon Prime Video 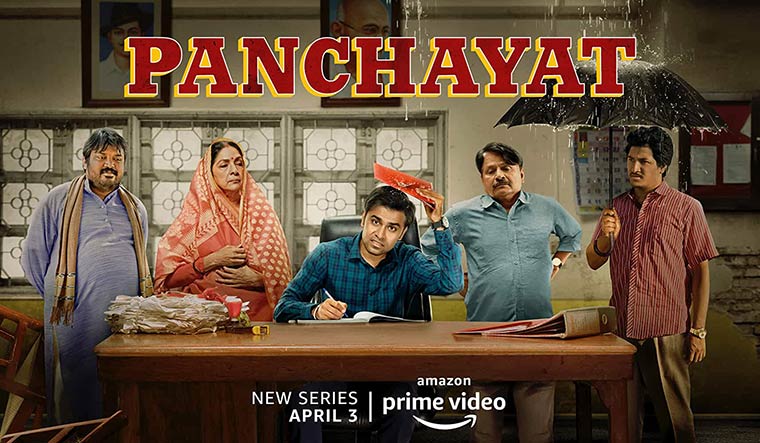 The small-town/village drama from the Hindi hinterland has almost peaked in films, even web-series, over the last five years. But go deeper and there are a gazillion stories waiting to be told. They need not be extraordinary, but isn’t that’s what life is about -finding the interesting in the ordinary. Created by The Viral Fever (TVF), Amazon Prime Video Original, Panchayat, an eight-episode series, through the journey of city-bred protagonist Abhishek Tripathi (Jitendra Kumar), sketches the life in a village and tries to build on instances that may seem inconsequential but are important to those living it.

In lack of a better job opportunity, Abhishek has joined as a secretary of a panchayat office in a remote village, Phulera, of Uttar Pradesh’s Baliya district. The decision has been taken with much contemplation. In the beginning of the series, he rues to his friend (a brief part played by Biswapati Sarkar) about his failing to procure a better placement in college that wasn’t as fancy as his friend’s, who would be working in a multinational company with a Rs 12 lakh per annum package. What he has instead got is a job that was easy-to-crack with a salary of Rs 20,000 a month.

The vocation of either of their academic courses is not mentioned. Perhaps, because it doesn’t really matter what they studied; people with higher, specialised courses opt for low-paying jobs because the options are limited and jobs are few. The show doesn’t delve deep into it, but it’s understandable.

“But you will get a chance to see the real India, the rural India,” the friend convinces Abhishek, insisting, “You will get a chance to become the Mohan Bhargava of Swades, develop roads and install hand-pumps.” Abhishek would take up the job eventually, but not because he is convinced with his friend’s reasoning, but because he doesn’t have an option. He would have preferred a regular employment in the familiar confines of a city. He will keep trying though to get back to the life he wants, the dream job that may come by preparing for the common aptitude test (CAT).

But before that, he has to put up with the idiosyncrasies of the people he has just got acquainted with in Phulera. Brij Bhushan (Raghubir Yadav) who is happily serving as the pradhan of the panchayat even though the seat has been won by his wife Manju Devi (Neena Gupta) after the government’s reservation for women in the previous election; the inimitable good guy, Vikas (Chandan Roy), the office attendant; the deputy pradhan (Faisal Malik).

Panchayat does not go for dramatic moments that would bring in drastic changes in the arc of any of its characters. It focuses, instead, on the regular life – like having instant noodles in the busy-ness of the day; the daily grind – something as simple as explaining to your mom on the phone your daily routine and diet; the idea of ‘hang in there’ for some more time no matter how overbearing life seems. The highlights, the crowning moments, are culled from these occurrences. But while the series sets out to paint a picture of what a simpler life in an Indian microcosmic world means, it does not forget to underline the loneliness of its protagonist amid its over-zealous inhabitants. He is still affected by the social media posts of his friends partying on weekends in the city life that he has left behind just to ensure a job security.

The show also does not overlook the deep-seated patriarchy, the male ego that hurts in minute instances no matter where you live or what your achievements are, the class and caste divide, the prevalence of dowry, the petty politics and much more.

But some moments are deeply resonant, elevated by Anurag Saikia’s soothing music. Villagers are fearful of that spreading tree with deep roots on an isolated path leading to the village. They consider it haunted. The myth behind it has to be busted and how. A water tower, something akin to the one in Sholay, is the best place to give a ringside view of the entire village. There is a certain sense of compulsion to keep nostalgia alive by protecting materialistic things like an ancestral lock. The show thrives in some of these moments, but withers in few when it starts advocating ideas. But those are rare and thus do not harm the overall simplistic atmosphere of the show.

However, what bothers is that the simplicity is taken too seriously. The city-bred and hopefully an aware youngster, in pursuit of a life he wants, does not seem to question enough and when and if he does, it seems too late. Also, for a village that has a woman as a pradhan, the screen time given to her is miniscule. That is not just a waste of Gupta’s talent but also a missed opportunity to create a wholesome show that could have gone deeper into analysing the village life.