In the second half, the core of the film takes a backseat 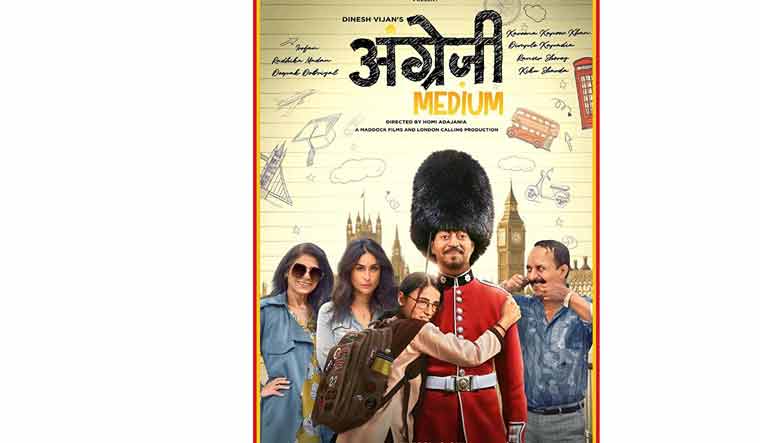 A rearticulated version of the famous line by poet Avtar Singh Sandhu (or Pash as he is popularly known)— sabse khatarnak hota hai sapno ka mar jaana (Death of dreams is the most dangerous thing)—forms the crux of Angrezi Medium. At an emotional juncture in the film, Champak Bansal (Irrfan Khan), a widower and a single parent, tells his daughter, Tarika (Radhika Madan): “aadmi ka sapna tut jaata hai na toh aadmi khatam ho jata hai (When a person's dream breaks, it is his end)”. He has learnt it the hard way.

Right at the beginning of the film, Champak confesses to being a confused soul—always conflicted between two choices. There are only three things (that evolve over the course of the film) that have made him certain of his choices. The first of the three being the choice of the woman he marries. And yet, he did not let her opt for further studies, the only thing she desired for. He eventually loses her and somewhere blames himself for killing her dreams. He would not do that to his daughter, who has only harboured one dream since she was a child—of going abroad.

Through three instances where as a child Tarika is introduced to the Eiffel Tower (France), the Queen (United Kingdom) and Hollywood (United States), with an undertone of humour, the script establishes her aspiration to go abroad. Champak, in the meanwhile, has just made false promises. It is only in her late teens and as she is completing school that Tarika’s resolute becomes stronger. Even if it requires an average student like her to double the amount of effort she puts into studies to attain that scholarship that would ascertain her entry into a London college, she does.

However, Champak, a sweetshop owner in Udaipur, is very possessive about the family name Ghaseetaram that he uses as the name of his shop, so does over more than 100 other extended family members. For the ownership of the name, the entire family is embroiled in a bizarre legal battle often leading to inexplicable situations between Champak and his cousin, Gopi (Deepak Dobriyal). The peculiar fight also becomes the reason for Tarika losing her seat at the University with the only option remaining is go for a seat through a private counsellor.

Director Homi Adajania's fourth feature, Angrezi Medium—a follow-up to the 2017 Hindi Medium (directed by Saket Chaudhary)—is about an aspirational daughter and a loving father who fears losing her to her aspirations. Besides his initial hiccup of overcoming his fear of losing her, Champak’s battles also become about managing finances, finding an alternate route to procure a seat for Tarika in London, and eventually being indiscreet about his and Gopi’s identity, who travels with him to London, after being blacklisted by the cops. A series of misadventures follow.

That is when, mostly in the second half, the core of the film—about the father-daughter bond and aspirations—takes a backseat. It becomes more about the misadventures of Champak and Gopi, their inability to communicate in English and often finding themselves in odd situations. It’s a good trope to introduce humour, especially when both Irrfan (who is back on the screen after a considerable gap) and Deepak have an established camaraderie and comic timing from the time of Hindi Medium, but does not fit too well in the film. There are some scenes that stand out for the coming timing and presenting serious issues with a lighter undertone, like the jokes on stereotyping Muslims or the constant struggle of not knowing English in a foreign land. But most situations are forced and outright bizarre to believe.

Written by Bhavesh Mandalia, Gaurav Shukla, Vinay Chhawall and Sara Bodinar, the film even with a bunch of good actors including Kareena Kapoor and Dimple Kapadia who shine every time they are on-screen, falters because of inconsistency. It also wastes the talent of Pankaj Tripathi and Ranvir Shorey, who have been given caricaturish parts just to introduce laughter and seem force-fitted into the scheme of things.

Towards the end, even if the film gets back to its original plot point bringing the focus back on Champak and Tarika, it loses its underlying theme. The father’s character, which started out as someone committed to fulfil his daughter’s dream, becomes a ploy for a commentary about being with family, embracing one’s own country and shaming kids who want to be independent after a certain age without any social restrictions and expectations.