'Panga' review: Kangana is perfect in a realistic film about chasing your dreams 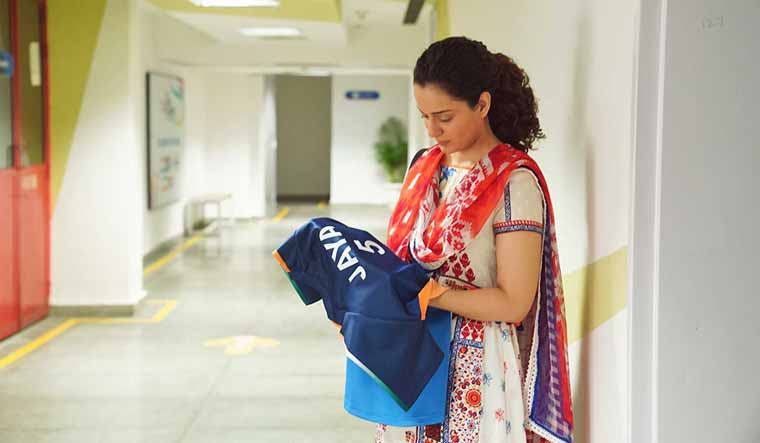 The smaller moments make a lot of difference in Panga, a film about a passionate, national-level kabaddi player who gives it all up and is currently a selfless mother and dutiful wife. During a post-dinner reflective conversation with her husband Prashant (Jassie Gill), Jaya Nigam (Kangana Ranaut) talks about the happiness she feels when she sees him and her son Adi (Yagya Bhasin), and how when she sees herself, there is no happiness.

While the film is full of such moments, this stood out for me in the film directed by Ashwiny Iyer Tiwari (Nil Battey Sanatta, Bareilly Ki Barfi). A woman who was at her peak as a sportswoman seven years ago, leaves her only passion to nurture her family and find contentment in being a regular employee at railway ticket counter in Bhopal. But it is only a matter of time for her to sense meaninglessness in her individual existence seven years later. The beauty of the film is not isolated to this scene where Jaya realises she needs to give her only passion a second shot, but it is in the build up that leads to this particular moment and the struggles that follow after it.

We are introduced to Jaya and her family as a happy entity living a middle-class life in a railway quarter. There are the usual moments of family banter, of selfless mother-child love, of loving spouses and of pressures at work. And one day, her seven-year-old still raises questions when she fails to show up for a school function amid work pressure. Is work that important that she would even miss her only son’s triumphant moment at school, he asks.

Women face a relentless stream of such questions on a daily basis. Some fight it and some live with it. But Panga (that loosely translates ‘to mess up with’) is not about either, it rather is about the way one can find a middle path—to live and yet not create unnecessary conflicting situations, to find a balance. In a subtle way, the story, written by Tiwari and Nikhil Mehrotra with additional dialogues by Nitesh Tiwari, observes what it takes for a woman to realise her dreams, to beat the deeply-entrenched patriarchy, to beat the stereotypical expectations from women. Is it just women who can fight it, or do men play an equal part?

At times, it seems that the film gives too much importance to its man, Prashant. But an objective scrutiny of it makes it just fine. When Jaya’s mother (delightfully played by Neena Gupta) is doubtful about her comeback to kabaddi, she expects Prashant to side with her. But Prashant’s pragmatism is refreshing. He wants Jaya to give it a try. And that changes everything. In any different milieu, had the same happened, it would have come across as too righteous or may be too larger-than-life. But in the present context, it is just right. The man here deserves an applause for breaking stereotypes. He is ready to join an all-women WhatsApp group to be updated of the happenings in his son’s school, attempts to cook, tries juggling everything at home and work even as Jaya, in another city, is trying to revive her dream. The film is aware of what it is doing. At one point, a character says pehle ladkiyaan apne patiyon ko Shah Rukh Khan ki tarah romantic banne ko kehti thi, ab Prashant ki tarah supportive banne ko kahengi.

If the family dynamics takes precedence in the first half, Jaya’s tryst with kabaddi as she vies for inclusion in the national team is integral in the second. Her best friend-turned-coach, Meenu (Richa Chadha) helps her in propelling her dream. That also talks a lot about female camaraderie. A neighbour, only addressed as bhabhi through the film, too, becomes part of the representation of this camaraderie. She helps and never frowns. But it is never about one thing—everything runs parallel, giving the film a life beyond a sports drama. Even in doing so, there’s a nice flourish in the kabaddi parts.

Kangana scores on the performance. She gets into the psyche of Jaya to create a character that pushes you to feel for her. Her struggles are real and her approach practical. However, it is Richa (in an extended cameo) and Jassie who surprise the most—the former with a feisty, funny and cool portrayal of a woman who has lived her dream without giving-in to the pressures of marriage, and the latter with his subdued and restrained performance that makes Prashant not just likeable but worthy of setting an example.