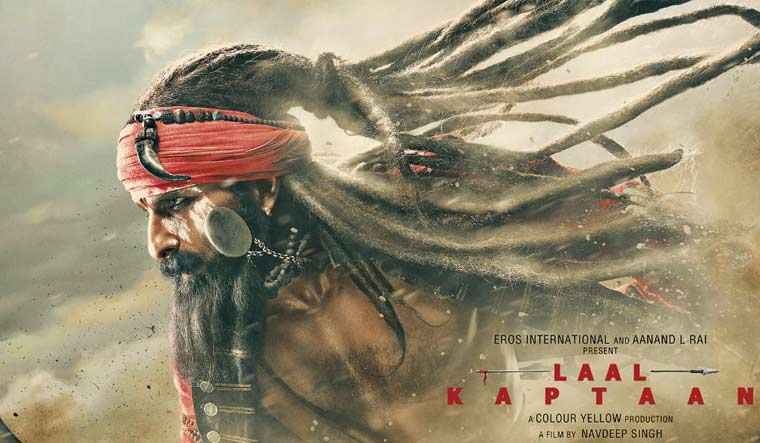 The year is 1764. A historical revenge drama unfolds right after the Battle of Buxar. Fast forward 25 years, and we see an ‘assassin sadhu’ who maims and kills in pursuit of a man from his past. Why? Laal Kaptaan gets to it later. Much later.

Saif Ali Khan plays a Naga sadhu who is in a crazed, bloody pursuit of warlord Rehmat Khan (Manav Vij). Armed with swords and spears, the Gosain leaves a trail of death and destruction as his thirst for revenge takes him across the barren lands of Bundelkhand. Along the way, he encounters a few characters, some who are out to kill him, and others who help him only to further their own agenda.

We also see a tracker, played by a funny and delightful Deepak Dobriyal, who sniffs around like a hound (along with his two hounds Sukhiram and Dukhiram), picking up scents and successfully tracking people for a price. Dobriyal gives the film some much-needed humour, but only in flashes.

Saif Ali Khan nails the look of the vengeful sadhu with his scarred, ash-covered body and matted dreadlocks, albeit a bit Jack Sparrow-esque devoid of any wit. Manav Vij remains mostly an extremely sedate version of what could have been a truly evil, menacing warlord trying to make sense of the Gosain's bloodthirst. Zoya Hussain doesn't make much impact in her role as a widow who helps the sadhu. And, watch out for the laal pari, a slightly scary, desi version of GoT's Red Woman.

Laal Kaptaan is a pretty cut and dry revenge drama, for most part, but the story moves along at a slow, dull pace, barely making any impact on the viewer. Even during the action scenes, you expect the plot to lead somewhere, but it only adds to the quagmire where good stories with potential go to die. There are many instances where one wonders if there is a point to this whole thing. The film gives you hints every now and then through flashbacks to guess why this Gosain is looking for the Pathan warlord.

The ending does give you the answer, but does little else to satisfy you.