Pailwaan review: An engaging watch with plenty of action and drama 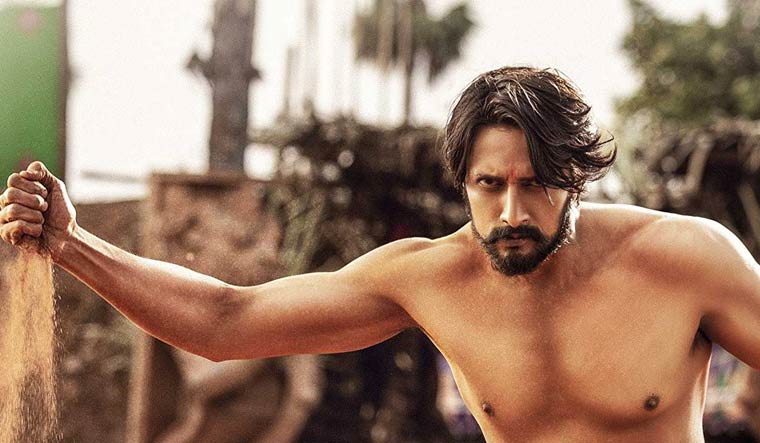 Krishna (Sudeep), an orphan who is lovingly called Kichha (which is also Sudeep’s sobriquet in real life), bets to defeat three boys in a street fight so that he can help a few starving children. Sarkar (Suniel Shetty), who witnesses this, brings him home and trains him as a desi wrestler at his Veeranjaneya Akhara at Gajendragad in North Karnataka.

Sarkar dreams of making his favourite disciple and foster son Krishna a national champion, and he is hopeful that Krishna will fulfill his dream. Krishna grows up to be a strong-willed, fierce wrestler, and falls in love with Rukmini (Akanksha Singh), daughter of a wealthy businessman in town. However, Rukmini gets engaged to the son of her father's business partner. Meanwhile, in the city, boxing coach Vijayenra (Sharath Lohitshwa) and his foul-playing, but game winning boxer Tony Sebastian (Kabir Duhan Singh) part ways after the opponent of Tony dies in the ring during a fight.

Narcissistic prince Raja Rana Pratap Varma (Sushant Singh), who assaults a newly-appointed police inspector when he tries to pull down an unlawfully erected cut-out of Varma, organises Darasa Kusthi competition at his palace. Krishna is also invited to the competition, which has prince Varma as one of the contestants.

Varma, who was hoping to win the game, loses to Krishna, and his ego is shattered when people run over the fallen cut-out of his figurine to congratulate the winner. While Rukmini is about to get married to the man she is engaged to, Krishna enters the marriage hall and marries her. He brings her to Sarkar to seek his blessing. Sarkar had earlier told Krishna to forget Rukmini and concentrate on his goal of becoming a national wrestling champion. When he sees him married to Rukmini, Sarkar tells him not to practice the sport he taught him. Krishna agrees to do so.

After the intermission, Krishna is living a tough life doing petty jobs in the city to make ends meet. Meanwhile, Varma continues to search for him to exact vengeance for the defeat. Boxing coach Vijayendra, who hears about Krishna when he goes to Gajendragad to buy used Kusti wooden weights used by him, which Sarkar wants to dispose because it brings back old memories, is also searching to meet him, but he narrowly misses him many times.

Varma finds Krishna with the help of his informer, and drives his Rolls Royce Phantom to a slum, to challenge Krishna to fight. Krishna tells him that he promised to his foster father that he would not fight. Enraged, Varma kidnaps Krishna's daughter.

Vijayendra goes to a garage where he finds Krishna's photo and manages to trace the wrestler with the help of one Krishna's friends. What follows is a fight at the royal palace where Krishna is seen taking beatings from Varma's goons without fighting back. Varma threatens to kill Krishna's daughter. By then, Sarkar appears dramatically and tells Krishna to fight back. After the reunion with Sarkar, Krishna, in a flashback, is seen visiting his father-in-law and apologising to him for marrying his daughter against his wish.

By then, Vijayendra explains to Krishna his search for a spirited fighter who can take on Tony. Krishna says he is ready to fight if it pays him enough to take care of the under-privileged kids who he is helping. After a training montage in the form of a song, Krishna meets Tony in the ring. The match initially has Krishna struggling against Tony. However, he beats Tony in the end despite suffering severe facial injuries.

Suniel Shetty, who is making his Sandalwood debut, has a significance screen presence as the mentor of the protagonist. The movie has plenty of family drama and sports action. It also packs some Sandalwood-style action to keep the fans of Sudeep happy. The movie would have been more gripping had it been edited a little more tightly.