A classy drama with a tablespoon of history, a dash of politics and a pint of action 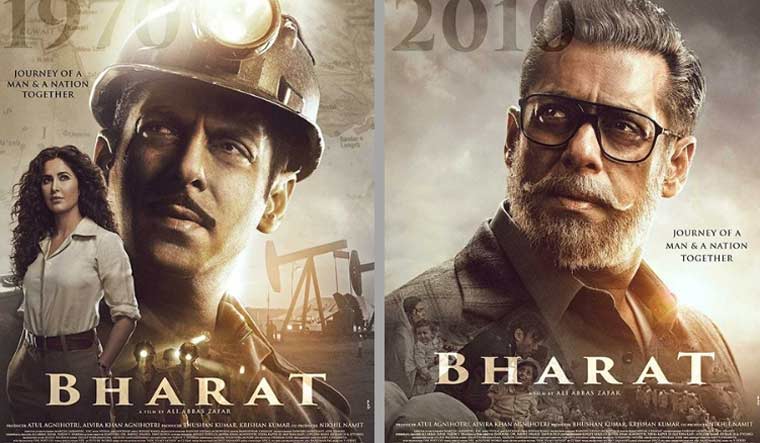 Sallu bhai did it again! The actor managed to garner applause and bucket load of tears from his fans with his Eid release. Not only did he flaunt his ‘dolay sholay’(muscles) but also his signature emotional act which made many pull out a tissue. Classy drama with a tablespoon of history, a dash of politics and a pint of action, garnished with some comedy, that is Bharat in a nutshell.

The movie starts with a 69-year-old grumpy Bharat who refuses to let go of his ration store, 'Hind Ration Shop', to a foreign investor who wants to build a mall. Now, the name of the store keeps popping up throughout the movie, almost ruining the real focus of the script.

The scene then shifts to Bharat’s home, a joint family setting where talks about celebrating his 70th birthday are on. It was on August 15, 1947, that Bharat came to the newly-formed Hindustan from Mirpur, in Pakistan, on a train full of refugees. And so, he decided to make this day his birthday and celebrate it every year at Attari-Wagah border, the last railway station connecting Delhi to Lahore.

Enter Katrina Kaif a.k.a ‘Madam sir’ a.k.a Kumud Raina, who for a minute, the audience think is Bharat’s wife. Especially after Sallu’s blush when she calls him ‘sexy’. The viewers get clarity on their relationship only when Bharat’s niece asks him the reason why they did not get married despite having met 40 years back. With the clash of marbles breaking into a flashback, the scripted delay of the train at the station weaves in a perfect gap for Khan’s storytelling session.

It starts off with an eight-year-old Bharat overhearing his teachers’ conversation about the perilous situation in Mirpur after the Partition. Jackie Shroff, who plays Bharat’s father, a station master, manages to deliver despite the short screen time.

From sharing a jalebi with his son to covering Bharat’s eyes in the train full of corpse and letting go of his chance of escape to save his family had a strong impact on the viewers. The scene where Shroff hands his wrist watch to Bharat, asking him to take care of the family hits the audience right at the feels; some intricate detailing by Ali Abbas Zafar, symbolising a change of authority. “Go to 'Hind Ration Shop',” he keeps shouting as he climbs down the train. Separated from his father and sister, Bharat dedicates his life to keeping the promise he made to his father.

Bharat’s story has a comical turn after he meets a friend. Together, they join The Great Russian Circus team and that is where Disha Patani comes into the picture. Though Disha’s chiseled body added the fizz to the item number, it did not fetch her a lot of applause. However, Katrina Kaif had a strong role; a radically distinctive blend of comedy and drama, different from her other movies. From a government officer to a field supervisor to a television anchor, she sported every role with wit and grace. Her smart saree-clad look with the perm crown will be the talk of tinsel town for a while now.

Sunil Grover did an excellent job bringing in the humour element. His role as Bharat’s best friend unveiled an interestingly emotional side of the actor who is mostly known for his comical skills.

The Wagah border is definitely Khan’s lucky spot. Every scene there has fetched him applause and bucket loads of tears. Remember Bajrangi Bhaijan? Even in this movie, the scene where he waits for his father at the border moved many to tears.

Even Tabu, like Jackie, had a short screen time but she did not let that affect her role as Bharat’s sister whom he lost during his escape. The scene where she holds out her torn kurta and Khan holding out the other bit was not just touching but also powerful.

At the end of the movie, Khan marries Katrina Kaif at 70. Ali sure did overdo that bit. The movie could have ended with them on the swing and probably had people thinking about missed opportunities. Nonetheless, the wedding at 70 sure did get a couple of hoots from the crowd. Or was it the fact that his fans secretly want the actor to get married to her for real?