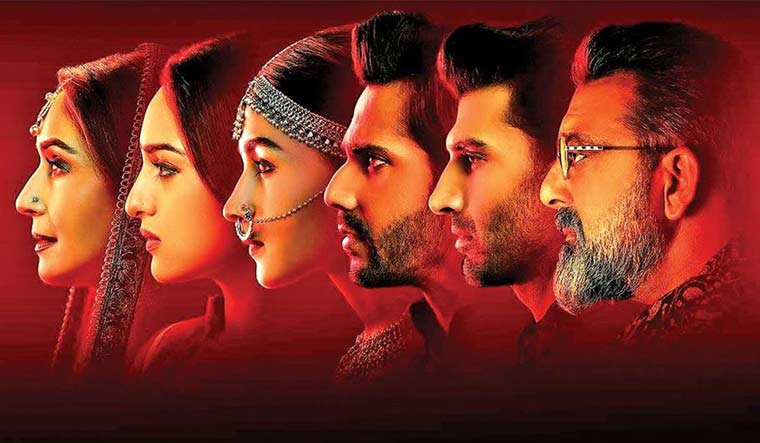 It wouldn’t be wrong to classify the regular Bollywood masala fare into a few of distinctive categories. Films about the heir of a rich family falling in love with a nautch girl, those about illegitimate kids, movies about long-lost brothers meeting and bonding in their adulthood, and those about the ultimate sacrifice made by women of the family.

Kalank has all the elements of a quintessential Bollywood film—star-crossed lovers, an illegitimate affair, two brothers from different mothers who meet for the first time accidentally and bond, selfless women who give up their lives for the happiness of the men in their families, and an evil and manipulative villain. It also has opulent sets, a brothel and a mansion, high-octane drama, and an overdose of dance and songs to introduce characters. What Kalank lacks is originality. It looks like a mishmash of many Hindi films over the years.

The only element partly holding the movie together is some good performances by the actors—but not everyone’s role is well etched out. The movie brings together the on-screen hit couple of the 90s, Madhuri Dixit (Bahaar Begum) and Sanjay Dutt (Balraj Chowdhury) after over two-and-a-half decades and the hit pair of recent times Varun Dhawan (Zafar) and Alia Bhatt (Roop) apart from Sonakshi Sinha (Satya) and Aditya Roy Kapur (Dev Chowdhury).

Kalank begins in the year 1944, in Husnabad near Lahore when India is on the verge of Partition. Satya, the dutiful wife from the most affluent family in Husnabad that runs The Daily Times, discovers after a medical check-up that she has only a year or two to live. What happens next isn’t surprising. Foreseeing what would happen to her husband, Dev, after she is gone, Satya goes knocking on the doors of a man in Rajputana, who was helped by her family in the past. She wants the eldest of the three daughters of the man, Roop, to come and familiarise herself with her family before Satya dies, so that Roop can marry Dev later. Roop agrees after her father’s emotional plea but on one condition—she would only enter Satya’s house after she marries Dev.

Dev, however, finds it hard to love Roop even after marrying her as he is still in love with Satya. Feeling betrayed, Roop looks for meaning beyond her marriage and steps to the forbidden area— Hiramandi that houses Bahaar to take music lessons from her. Later, she falls for the bad guy, the good-looking, bare-chested philanderer of the area, Zafar, the ironsmith.

In the meanwhile, the community of ironsmiths, led by Kunal Kemmu’s Abdul, are putting up a fight against the Chowdhurys who want to set up a steel factory in the town, which may lead to unemployment for the community. In a town populated mostly by Muslims, Chowdhurys are a minority, but are empowered by money and a newspaper which is their mouthpiece. If this is not enough to expect the doomsday for the young couple in an illegitimate relationship, there’s also a backstory connecting them. As the relationship between Roop and Zafar evolves, secrets tumble out. But it takes so much time and repeated attempts to unravel the full secret that the plot becomes drab. Little attention to the characters of Dixit, Dutt, Sinha and Roy Kapur, ensures that you don’t connect with them emotionally, thus losing interest. Club it with the sets that looks tad synthetic and you would be bored out of your wits.

Kalank (taint) is based on a concept derived by the late Yash Johar. A Karan Johar production, written and directed by Abhishek Varman, it tries to bring home the point whether you look at love as as an emotion or a taint. But in the absence of a cohesive storyline, Kalank fails to offer the desired impact.