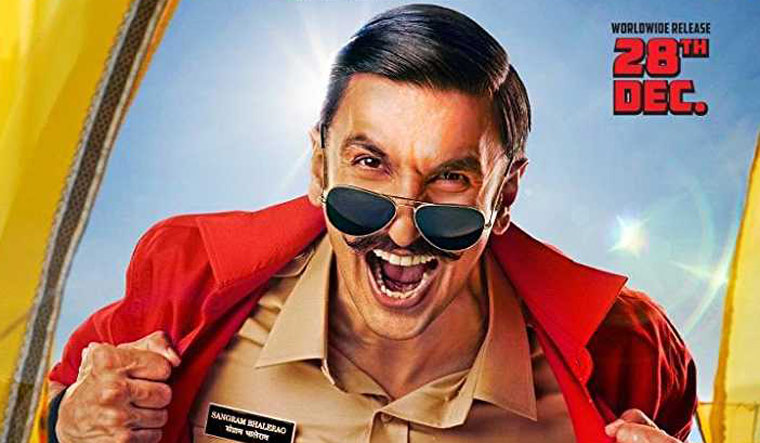 The flashy, flamboyant Ranveer Singh is back at doing what he does best—being flashy and flamboyant. The first half of Simmba, the latest offering from Rohit Shetty, is all about that. Like most of his other films, there are songs shot at picturesque locations, big, fast cars zooming in and out of screen, and at the centre of it all the hero, Ranveer Singh's Simmba, who is hardly ever away from screen. In case he is away, the camera keeps bringing him back in, at times even offering the audience shots of him sleeping.

No, I am not complaining. Ranveer Singh, with his infectious, over-the-top performance, actually wins the audience over—something that he has a penchant for doing.

When you enter the theatre to watch a Rohit Shetty film, it is taken for granted that you know that the director would have created a universe around his protagonist. There is less space for anything else, even if it is a movie about women's safety.

Sangram Bhalerao alias Simmba's story begins in Shivgarh, the same town from where another Shetty hero, Ajay Devgn's Bajirao Singham, hails. And the film begins with a voice-over by Devgn, introducing Simmba, an orphaned kid who realised early on in life that money clubbed with power is the most important thing in life, and that power comes from being a cop.

The kid grows up to be a corrupt cop. Simmba gets transferred to Miramar, Goa, to protect the local don, Durva (Sonu Sood) and do "whatever he wants to do there" which translates to be as corrupt as possible. That doesn't earn him respect from all, or at least the head constable of the police stataion, Mohile (Ashutosh Rana) who despises him for his ways and refuses to salute him.

Nonetheless, Simmba's charming, wicked grin, broken English in Marathi accent, and spoofing of old Hindi songs impress Shagun (Sara Khan), a caterer who delivers food to the police station. He also manages to establish close ties with a few woman, particularly with a young girl, Aakruti, who teaches kids in a night school.

Just before the film breaks for interval, Mohile wishes a Tsunami should strike Simmba. We would have wished otherwise; because it's this that changes the whole Shetty universe from a masala entertainer to acquire the guise of being aware. The narrative that so far was enjoyable because of the buffoonery, soon takes a despicable turn. More so because a woman has to be brutally raped for a man's machismo to be fully displayed.

Simmba undergoes a transformation when he learns that Durva's brothers have raped someone close to him. What follows is cringe-worthy court proceedings where the witnesses turn hostile and evidence are tampered with. Going by Simmba's love for spoofing old songs so far, I, for a minute, thought there would be a spoof of "Tarikh pe tarikh" from Damini (1993). As a side note, that's the era the film seems to be stuck in. In fact, I would have probably enjoyed that more.

In his attempts to come up with an action flick that is also socially relevant, Shetty fills the film with long monologues about the number of women raped in India since 2011 and gives an account of the 2012 Delhi gang-rape. This is later followed by a candle-light vigil. Now, that is not something that you expect from a Shetty movie.

What follows is an attempt to suddenly showcase the viewpoint of women, who have been given hardly any importance so far (Sara Ali Khan has a maximum or four-and-a-half scenes). Simmba asks all the mothers and sisters he has made so far in the film to talk about what would be the best punishment for the rapists. That would, of course, be death for them.

So, Simmba turns a vigilante and plans an elaborate exercise in the police station. Thank god for that. As fake as it looks, at least Shetty is consistent here. That will, in turn, also make sure that he gets returns at the box-office. And if that is not enough to elevate the experience for the viewers, there is more on offer. We are talking about Singham, who comes back for a stylised action sequence, and to give the film a fillip. That is not all, either. Shetty teases us with a glimpse of another hero, who will take over his universe in the time to come. There, there. Too many men packed in a film that tries too hard to be about women and their safety.