Caspian seals are classified as endangered 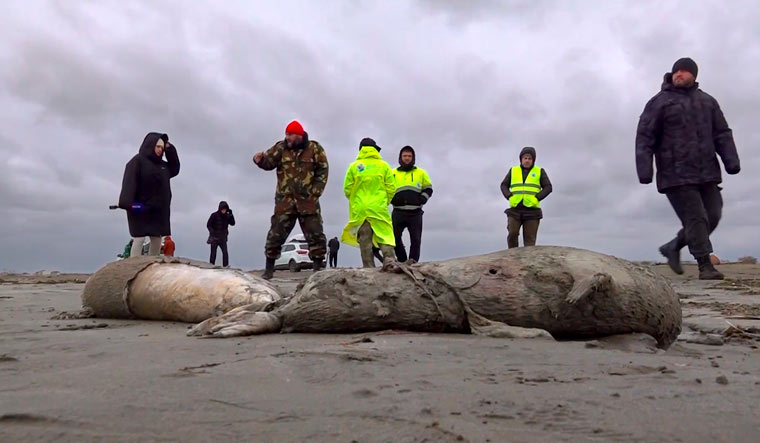 Journalists and Interdistrict Environmental Prosecutor's Office employees walk near the bodies of dead seals on shore of the Caspian Sea, Dagestan | AP

Bodies of about 2,500 seals have been found on the Caspian Sea coast in southern Russia. According to officials, there is no sign of violent deaths. Initially, 700 seals were reported, and the numbers increased as the investigation went on.

Authorities in the Russian province of Dagestan said the deaths might have happened due to natural causes. According to the fisheries agency, the overall number of Caspian seals is 270,000-300,000, while the Caspian Environmental Protection Centre put the number at 70,000.

Caspian seals are classified as endangered on the International Union for Conservation of Nature (IUCN) red list, AP reported.

Zaur Gapizov, head of the Caspian Environmental Protection Centre, said in a statement that the seals probably died about two weeks ago, BBC reported. He said that there is no evidence that the seals were caught in fishing nets or were killed. Samples have been collected from the seals to investigate the cause of death.

Overhunting and industrial pollution have caused the numbers of Caspian seals to dwindle over the decades.