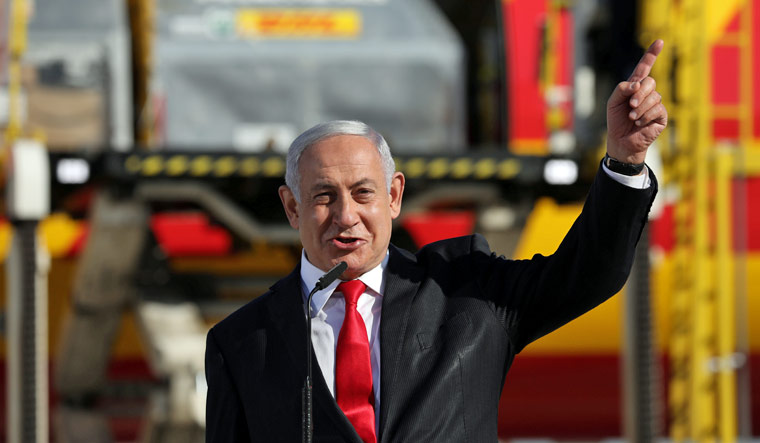 With 91 per cent of the ballots counted in the Israeli parliamentary elections, former Prime Minister Benjamin Netanyahu-led right-wing bloc has taken a comfortable majority with 65 seats in the 120-member parliament on Thursday, paving way for his triumphant return.

Among the smaller parties to have crossed the 3.25 per cent threshold required to qualify for the Knesset or parliament representation, Ra'am is likely to win five seats, Hadash-Ta'al and Yisrael Beytenu will also have five lawmakers, and Labour Party will win just four seats.

The Left-wing Meretz party, which is hovering close to the threshold, seems to have slipped slightly even further from qualification.

Arab party Balad, which split from the broader coalition of the Arab parties to go independent, also seems to be failing the threshold mark.

Meretz's qualification could reduce the right-wing bloc led by Netanyahu to 61-62 seats.

Balad's qualification, very unlikely as of now, however, would lead to continued deadlock in Israeli polity.

The counting is likely to conclude on Thursday afternoon.

The Netanyahu-led government would see a sharp drop in women in the coalition.

Current results project 9 female MKs in parties that back the former prime minister, with none among the ultra-Orthodox factions, according to the Times of Israel newspaper.

Based on these results, the likely Netanyahu-led coalition will have nine female MKs six in his Likud party and three from the far-right Religious Zionism, though the figure could end up rising through ministerial appointments.

The outcome would mark a stunning comeback for Netanyahu, who is currently on trial in three corruption cases, after a short stint in opposition.

Israelis voted on Tuesday for an unprecedented fifth time in four years to break the political impasse that has paralysed the country.

Israel has been locked in an unprecedented period of political stalemate since 2019, when Netanyahu, the country's longest-serving leader was charged with bribery, fraud and breach of trust.

About 6.78 million Israeli citizens were eligible to elect their 25th Knesset.

Some 210,720 new voters were able to vote for the first time, accounting for about four to five seats, adding an interesting dimension to the polls.

For many years, Netanyahu, Israel's longest-serving premier, appeared to be politically invincible.

But he met with a rude jolt after being ousted by an unprecedented coalition of parties whose only common goal was to see his ouster.

Born in Tel Aviv in 1949, Netanyahu holds the record of being the longest-serving Prime Minister in the country's history.

Having served in the position earlier between 1996 and 1999, Netanyahu in 2020 surpassed the record held by one of the Jewish state's founding leaders, David Ben-Gurion.