Li had earlier announced his decision to quit 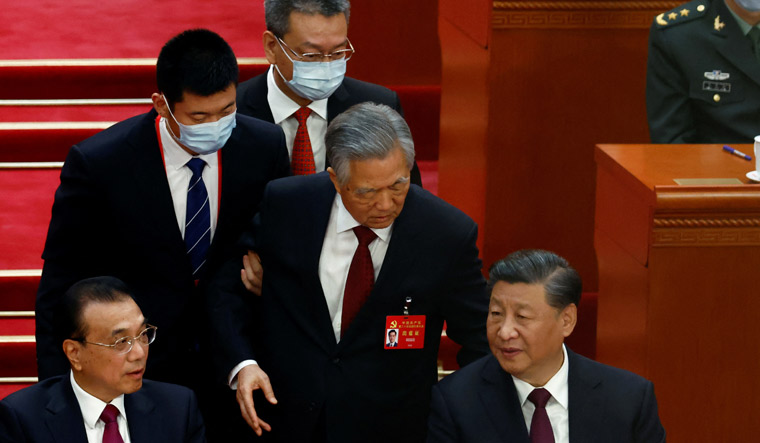 Former Chinese president Hu Jintao leaves his seat next to Chinese President Xi Jinping and Premier Li Keqiang, during the closing ceremony of the 20th National Congress of the Communist Party of China, at the Great Hall of the People in Beijing, China | Reuters

Chinese President Xi Jinping is all set for an unprecedented third five-year term as he was elected to the powerful Central Committee of the ruling Communist Party on Saturday while several top leaders including Premier Li Keqiang have been left out in the major shake-up at the top.

Xi, 69, was elected to the Central Committee, which will meet on Sunday to elect a 25-member Political Bureau which in turn will choose seven or more members to the Standing Committee to govern the country.

The Standing Committee in turn will elect the General Secretary, who heads the party and the country.

With his election to the Central Committee, Xi is on course to become the General Secretary, observers here said.

As he is all set for a record third term and perhaps for life, Xi has further consolidated his power with many of his own associates making it to the Central Committee.

They are all part of the outgoing seven-member Standing Committee headed by Xi.

Both Li and Wang are regarded as moderates. Li, who steered the Chinese economy for the past ten years, has already announced his decision to quit as Premier though he is one year short of the official retirement age of 68 set by the party.

Among the other notables, Foreign Minister and State Councillor Wang Yi was elected to the Central Committee while former foreign minister Yang Jiechi was dropped.

After the election of the Standing Committee on Sunday, Xi along with the new team is due to appear before the media who are kept in a closed loop COVID quarantine in a hotel here.

Xi, who is completing a 10-year tenure this year, will be the first Chinese leader after party founder Mao Zedong to continue in power, ending three decades of the rule followed by his predecessors to retire after two five-year tenures.

Observers say the new tenure will put him on course to continue in power for life like Mao.

The Congrees during its closing session also passed several key resolutions, including an amendment to its Constitution to grant more powers to Xi.

Banners displayed on a bridge in the district of Haidian, home to universities and tech firms in Beijing, had slogans: food, not COVID test; reform, not a cultural revolution; freedom, not lockdowns; votes, not a leader; dignity, not lies; citizens, not slaves.

Battery-operated loudspeakers were hung in some places blaring anti-Xi and anti-Zero COVID slogans.

Police quickly moved to remove the banners and loudspeakers. Similar reports of protests came from different cities of China.

After the appearance of the banners, security was further tightened in Beijing with the deployment of police on most of the city's bridges and underpasses.