The park, previously called Troyers Park, was renamed on Sept 28 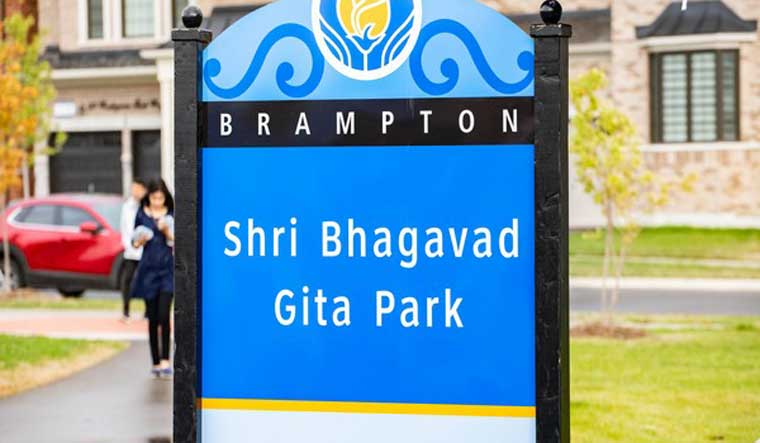 The Indian High Commission in Canada has condemned the vandalism of Shri Bhagavad Gita Park in Brampton, calling it a "hate crime." It also urged the authorities to launch a probe and take action against those who committed the crime.

The park, previously called Troyers Park, was renamed Shri Bhagavad Gita Park and unveiled on September 28. It was found vandalised on Saturday.

"We condemn the hate crime at the Shri Bhagavad Gita Park in Brampton. We urge Canadian authorities & @PeelPolice to investigate and take prompt action on the perpetrators," the High Commission of India in Canada tweeted.

The Mayor of Brampton, Patrick Brown, too has acknowledged the incident and stated that Canada has "zero tolerance" for such attacks. "We are aware that the recently unveiled Shri Bhagavad Gita Park sign has been vandalized. We have zero tolerance for this. We have flagged Peel Regional Police for further investigation. Our Parks department is working to resolve and correct the sign as soon as possible," Brown tweeted on Sunday.

It was Brown himself who announced the renaming of the park last week.  Announcing the renaming of Brampton's Troyers Park to Shri Bhagavad Gita Park, Brown had called Brampton a "mosaic" and said the renaming "commemorates the Hindu community and all they contribute to our city. We celebrate all cultures and all faiths in our city."

The attack came days after another prominent temple in Canada was vandalised, reported PTI. The temple, BAPS Swaminarayan Mandir, was allegedly defaced by Canadian Khalistani extremists with anti-India graffiti.

The temple attack had invited widespread protest, including from the Indian High Commission, which requested the Canadian authorities to investigate the incident and take prompt action on the perpetrators.

A week later, India issued an advisory to its citizens in Canada warning students to be vigilant against hate crimes, sectarian violence, and anti-India activities in Canada. "The Ministry of External Affairs and our High Commission/Consulates General in Canada have taken up these incidents with the Canadian authorities and requested them to investigate the said crimes and take appropriate action. The perpetrators of these crimes have not been brought to justice so far in Canada," the advisory added.