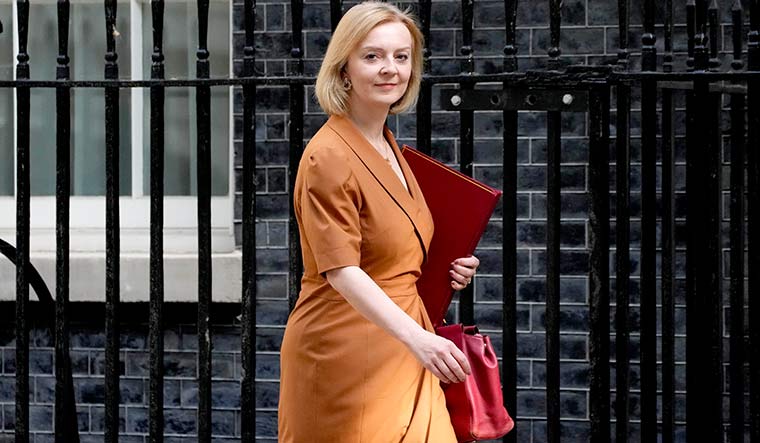 British Prime Minister Liz Truss said on Sunday that she could have done a better job laying the ground for her package of unfunded tax cuts, but insisted she would push on with an economic plan that has caused turmoil in financial markets and weakened the country's public finances.

Truss acknowledged that the UK faces a very turbulent and stormy time, but said her policies would lead to a high-growth, low-tax economy in the longer term.

The comments are unlikely to calm Truss' Conservative Party, which opens its four-day annual conference on Sunday in the central England city of Birmingham amid plunging poll ratings and growing public discontent.

Truss took office less than a month ago, promising to radically reshape Britain's economy to end years of sluggish growth.

But the government's September 23 announcement of a stimulus package that includes 45 billion pounds (USD 50 billion) in tax cuts, to be paid for by government borrowing, sent the pound tumbling to a record low against the dollar.

The Bank of England was forced to intervene to prop up the bond market, and fears that the Bank will soon hike interest rates caused mortgage lenders to withdraw their cheapest deals, causing turmoil for home buyers.

“I have learned from that,” Truss told the BBC. “I will make sure in future we do a better job of laying the ground,” she said.

Truss stuck to her insistence that Britain's economic problems were part of a global spike in inflation and energy prices spurred by Russia's invasion of Ukraine.

In a bid to calm the market turmoil, Truss and her finance minister, Chancellor of the Exchequer Kwasi Kwarteng, have said they will set out a medium-term fiscal plan on November 23, alongside an economic forecast from the independent Office for Budget Responsibility.

Many economists, and many Conservatives, say that means weeks more economic turmoil is ahead. Michael Gove, who served as a senior minister in previous Conservative governments, said the announcement will have to be brought forward and some parts of the economic package will have to be dropped.

Gove said there was an inadequate realisation at the top of government about the scale of change required.

Many Conservative lawmakers are worried that a leader chosen to replace Prime Minister Boris Johnson for her boosterish promises of economic growth has set the party on course for defeat in the next general election, due by 2024.

Opinion polls suggest the opposition Labour Party is opening up a substantial lead. Some delegates arriving for the conference in Birmingham were gloomy about the future of the party, which has been in power since 2010.

“I think it's going to be a rocky conference, definitely,” said Daniel Pitt, a party member from Erewash in central England. “The prime minister has to try and steady the ship.”

Truss said she would do what she could to win the hearts and minds of colleagues across the Conservative Party.

Truss said she wouldn't ditch the most unpopular part of her economic package, a decision to scrap the top 45 per cent rate of income tax paid on earnings above 150,000 pounds (USD 167,000) a year.

And she wouldn't say whether there will have to be cuts to welfare and public services to pay for lower taxes.

Asked if the Cabinet as a whole had decided on the cut to the top tax rate, Truss said, “No, it was a decision the chancellor made.”

I think there has been too much focus in politics on the optics or how things look, Truss said. She said she was confident her policies would get the economy growing by 2.5 per cent annually a target the UK hasn't hit for years.

Labour Party economy spokeswoman Rachel Reeves accused the Conservative government of doing some sort of mad experiment with the UK economy and ignoring the anxiety and fear felt by millions of ordinary people.

“The idea that trickle-down economics is somehow going to deliver the 2.5 per cent growth we all want to see is for the birds,” Reeves told the BBC.