Members of public can pay their respects till Monday morning 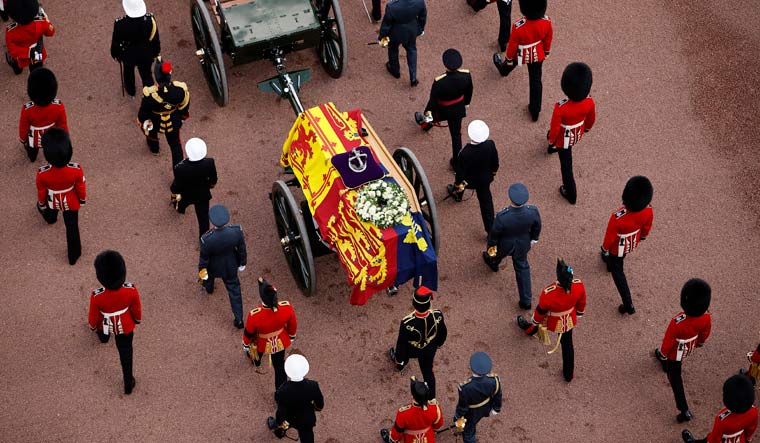 The choir of Westminster Abbey and the choir of St. James's Palace are singing as Queen Elizabeth II's coffin arrives at Westminster Hall to lie in state before her funeral next week.

The service begins with a prayer from Archbishop of Canterbury Justin Welby and includes a reading from the Book of John, as well as the Lord's Prayer.

The late monarch, who died last week after 70 years on the throne, was also the head of the Church of England.

Members of the public will be able to file past the coffin and pay their respects to the queen from Wednesday afternoon through early Monday morning.

The coffin will then be moved to Westminster Abbey for a state funeral.

King Charles III and Camilla, the Queen Consort, are leading the procession into Westminster Hall for a service marking the arrival there of Queen Elizabeth II's coffin.

Princess Anne and her husband, retired Vice Admiral Timothy Laurence, and Prince Edward and his wife Sophie, the Countess of Wessex, are following behind.

Prince William and his wife Kate, the Princess of Wales, and Prince Harry and his wife Meghan, the Duchess of Sussex, appear next in the royal entourage.

Camilla, Sophie, Kate and Meghan did not take part in Wednesday's procession through part of London, but they joined their spouses as the group entered Westminster Hall.

The procession comes before a short service of prayer for the monarch, who died last week after 70 years on the throne.

The queen will lie in state at Westminster Hall, part of the Houses of Parliament, until early Monday morning when her funeral is held.

King Charles III is wearing a full day ceremonial uniform with the rank of Field Marshal as he walks behind the coffin of his mother, Queen Elizabeth II, in its solemn procession from Buckingham Palace to Westminster Hall.

Charles is carrying a Field Marshal baton that was presented to him by the late queen in 2012. He also is wearing the Order of Merit with the Order of the Garter Sash and Star.

Next to him, the Prince of Wales is wearing a Royal Air Force No. 1 uniform, Garter Sash with RAF Pilot Wings and Garter Star Chest Order.

The Duke of York, meanwhile, is wearing a morning suit with medals and decorations.

Both Andrew and Harry are wearing morning suits at Wednesday's procession.

Their guns are sounding at one-minute intervals as her coffin travels to Westminster Hall, where it will lie in state.

Big Ben, the great and fabled bell housed in the Elizabeth Tower, also tolled at one-minute intervals during the procession Wednesday. The bell and its tower have been undergoing restoration, and the tolling was the most sustained since that work.

Britain is mourning for Elizabeth, who died last week at her summer retreat in Scotland at age 96 after 70 years on the throne. King Charles III is the new monarch.

The second row is made up of Charles' two sons: Prince William, the Prince of Wales, and Prince Harry, the Duke of Sussex. To Harry's left is Anne's son, Peter Phillips.

Behind them are the Earl of Snowdon, the Duke of Gloucester and Vice Admiral Sir Tim Laurence, who is Princess Anne's husband.

Behind the royals are four key members of Charles' staff: the Master of the Household, the Principal Private Secretary, the Equerry and the Treasurer. Prince William's equerry walked behind them.

Also walking in front of the coffin Wednesday are the household, or staff members, who worked for the queen. They include her private secretary, her pages and stewards.

The coffin is on a gun carriage from the King's Troop Royal Horse Artillery. It is flanked by 10 pallbearers and Grenadier Guards.

The coffin is draped with the royal standard and adorned with the Imperial State Crown, which the queen wore for her coronation 70 years ago, resting on a velvet cushion and a wreath of flowers.

Meanwhile, a Guard of Honor is in position in Parliament Square near Westminster Hall. The guards are accompanied by a Royal Marines Band which will have their drums draped and muffled.

The line to view the coffin of Queen Elizabeth II is likely to be one of the longest that London has ever seen.

The line already stretches from Parliament, across nearby Lambeth Bridge and along the opposite bank of the River Thames.

Authorities have planned for a 10-mile (16-kilometer) route, with 1,000 marshals, stewards and police officers on hand at any given time to help manage it. An army of other volunteers includes multi-faith pastors and sign-language interpreters.

People are being warned they may have to wait for hours, but they are being given numbered wristbands so they can take food and bathroom breaks without losing their place in line.

When they get to Parliament mourners must pass through airport-style security screening. Prohibited items include liquids, spray paint, knives, fireworks, flowers, candles, stuffed toys and advertising or marketing messages.

Lines are forming along the bank of the River Thames in anticipation of seeing Queen Elizabeth II lying in state, even though authorities warn the wait could be up to 30 hours.

The public will be able to pay their respects to the deceased monarch at Westminster Hall from 5 p.m. (1600 GMT) Wednesday, after a procession bearing her coffin on a gun carriage from Buckingham Palace to Parliament.

The line starts near Lambeth Bridge and officials say it could eventually stretch several miles (kilometers) to Southwark Park in southeast London.

Some were so keen they started waiting early.

Vanessa Nathakumaran is first in line after turning up at 11:30 a.m. on Monday.

It's going to be an emotional one, and when you go in there, my main aim is to show respect, she said.

Chris Imafidon is sixth in line and said, I have 1,001 emotions when I see her. I want to say, God, she was an angel, because she touched many good people and did so many good things.

Horses, troops and military bands performed a full dress rehearsal before daybreak for the procession that will take Queen Elizabeth II's coffin from Buckingham Palace to Parliament's Westminster Hall.

Officials say the horses taking part have undergone special training for the Wednesday afternoon event, including how to handle mourners and flowers and flags being thrown toward the procession.

They get exposure to loud noises, crowds, flags, flowers, people sobbing, even to the point of banging lots of drums and making aggressive noises, said Sergeant Tom Jenks, who will be leading the gun carriage that carries the queen's coffin.

Among the horses is Cassius, an 18-year-old horse who participated in former U.K. Prime Minister Margaret Thatcher's funeral in 2013.

The procession on Wednesday afternoon will feature King Charles III and other royals walking behind the queen's coffin to Westminster Hall in Parliament. The queen's coffin will lie in state for four days for people to pay their respects.

Crowds are gathering in London as the city prepares for a somber procession taking Queen Elizabeth II's coffin from Buckingham Palace to the Houses of Parliament.

There, the late monarch will lie in state for four days before her funeral next Monday.

Huge crowds are expected for Wednesday's somber afternoon procession, and long lines are also predicted to view the coffin at Parliament's Westminster Hall.

People are standing behind metal barriers or sitting on folding chairs. Under gray skies hours before the coffin was scheduled to leave the monarch's official London residence, they have umbrellas at the ready and takeout coffees in hand.

The coffin will be taken on a horse-drawn gun carriage past the crowds of mourners, with the queen's son and heir King Charles III and other royals walking behind.

The queen died in Scotland last Thursday at age 96, ending a 70-year reign.

Crowds have lined the route of the queen's coffin whenever it has been moved on its journey from Scotland back to London.