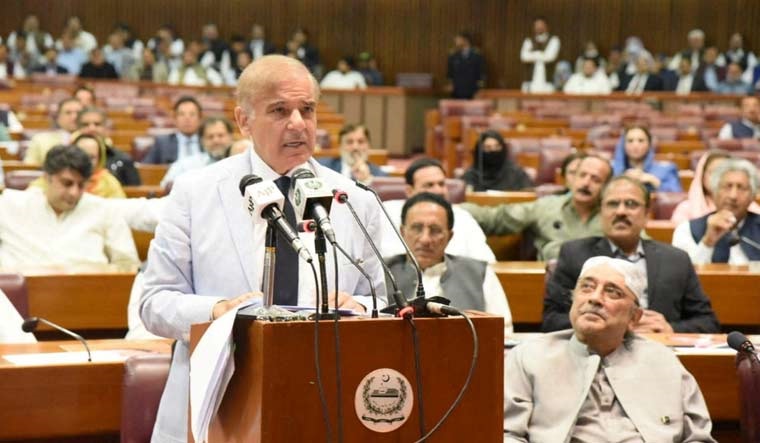 Pakistan's new Prime Minister Shehbaz Sharif raked up the Kashmir issue and the abrogation of Article 370 in his inaugural speech at the National Assembly and said his country would raise the matter at every international forum. He also asserted that though he wanted a good relation with India, it cannot be achieved without resolving the Kashmir issue.

Sharif, who replaced Imran Khan after weeks-long political tussle, said people in the Kashmir Valley were bleeding when India scrapped the Article 370 and accused his predecessor of not making any serious and diplomatic efforts against New Delhi's move.

"When the forceful encroachment was done in August 2019 and Article 370 was abrogated, what serious efforts did we make...what serious diplomacy did we try...Kashmiris' blood is flowing on roads of Kashmir and the Kashmir Valley is red with their blood," he said, adding that his government would provide political, diplomatic and moral support to the people of Kashmir.

Sharif urged Prime Minister Narendra Modi to take efforts to resolve the Kashmir issue so that the two countries could concentrate on tackling poverty, unemployment, shortage of medicines and other issues.

"Why do we want our coming generations to suffer. Come, let's resolve the Kashmir issue in line with UN resolutions and Kashmiris' expectations, so that we are able to end poverty on both sides of the border," he added.

Sharif, the younger brother of former three-time prime minister Nawaz Sharif, was sworn-in as the new PM on Monday, bringing to an end to the political uncertainty that had gripped the country since a no-confidence motion was introduced against Imran Khan on March 8.

Pakistan Parliament elected the 70-year-old leader who was the only candidate left in the race after former foreign minister Shah Mahmood Qureshi announced that his Pakistan Tehreek-e-Insaf party would boycott the voting and staged a walkout.

In his address to the National Assembly, Sharif dismissed Imran Khan's allegations of a "foreign conspiracy" to topple his government and offered to resign if the probe team finds any evidence in this regard.

"I say it on behalf of all our members that I will resign if a shred of evidence is found that it was a foreign conspiracy, that we got support from a foreign power, if our involvement is proved anywhere, I say it with you as witness Mr Speaker that I will resign that very second and go home," Sharif said.