UK to donate fleet of ambulances for urgent care in Ukraine 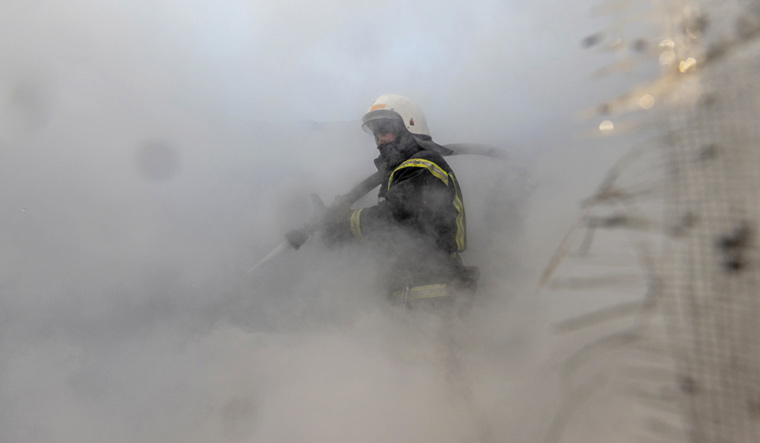 A firefighter works at a residential district that was damaged by shelling, as Russia's invasion of Ukraine continues, in Kyiv | Reuters

Afleet of the UK's National Health Service (NHS) ambulances will provide urgent care for those injured in Ukraine in the ongoing Russia-Ukraine conflict, the UK government said on Wednesday.

The donation of around 20 NHS ambulances is aimed at bringing vital lifesaving care to Ukrainians remaining in towns and cities reported to be facing Russian bombardments.

The UK Foreign, Commonwealth and Development Office (FCDO) said its donation will help replace those Ukrainian ambulances lost in attacks and bolster resilience as the "barbaric" conflict goes on.

"We have sadly seen day after day the horrific impacts of Putin's cruel war on the people of Ukraine, including evidence of appalling acts by Russian troops in towns such as Irpin and Bucha," said UK Foreign Secretary Liz Truss.

"The UK has been among the biggest aid donors, providing food, medicines and generators to help those affected. These world class NHS ambulances will now help bring lifesaving care directly to those injured in the conflict," she said.

The South Central Ambulance Service NHS Foundation Trust (SCAS) is donating four of its ambulances, with further donations from NHS trusts across the UK to follow.

"The UK government has stood shoulder to shoulder with Ukraine and provided them with the lifesaving medical equipment they need," said UK Health Secretary Sajid Javid.

"The invasion has damaged key medical infrastructure and the generous donation of four ambulances by South Central Ambulance Service will ensure people in Ukraine can receive urgent care. It marks the first of many ambulances the UK government and the NHS is donating to Ukraine in the coming days," he said.

The first set of ambulances will arrive in Ukraine this week, destined for Lviv in the west of the country, where they will be transported on to those areas most in need.

"Ambulance Trusts around the country have been rallying to provide ambulances and we in SCAS are immensely humbled to also be able to support those in need in Ukraine. We hope that this small gesture goes some way to helping provide immediate frontline healthcare support to the many people who desperately need it," added Paul Kempster, SCAS Chief Operating Officer.

It is estimated more than 12 million people are currently in need of humanitarian assistance across Ukraine. The conflict has stretched Ukraine's health services, with Russia's indiscriminate attacks targeting civilian shelters and even hospitals.

The UK says it has donated more than 5 million items of medical supplies, including resuscitators, wound care packs, bandages and medicines, to Ukraine to help the country cope with the medical emergency caused by the conflict.

It comes as the UK government has pledged to go further in its sanctions against the Russian government amid worldwide condemnation after images of dead bodies in the streets of the Ukrainian city of Bucha went viral.

Addressing the Russian public directly, British Prime Minister Boris Johnson released a social video on Tuesday night in which he accused Russian troops of committing atrocities, including the massacre of civilians and the raping of women.

''Your president stands accused of committing war crimes. But I cannot believe he's acting in your name,'' he said.

His foreign minister, Liz Truss, who met her Polish counterpart Zbigniew Rau in Warsaw this week, said more than 60 per cent of Russian President Vladimir Putin's "war chest" has been frozen by sanctions, which are pushing the Russian economy back ''into the Soviet era''.

More than USD 350 billion of Russia's USD 604 billion foreign currency reserves are unavailable to the regime, the minister claimed.

''So far our sanctions have had a crippling impact on those who feed and fund Putin's war machine,'' Truss said.

The UK has announced a GBP 10 million fund to support organisations in Ukraine, including those helping victims of conflict-related sexual violence. The UK will also be providing funding and technical assistance for the International Criminal Court's investigation into reports of rape in Ukraine.