The UMS Minye Kyaw Htin is a Ming class submarine 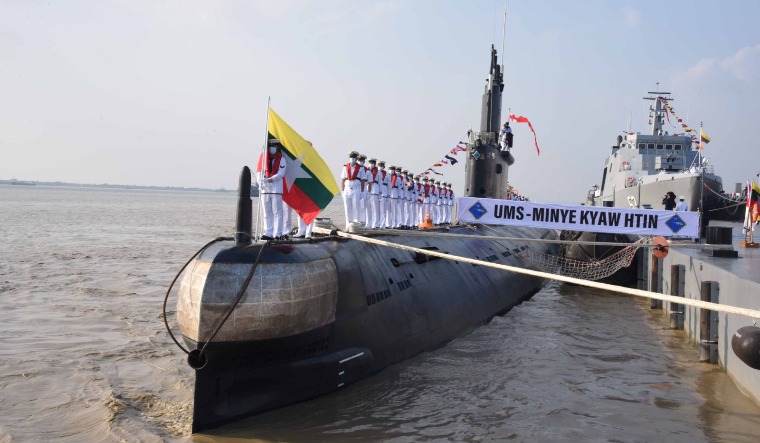 Myanmar's Navy has announced it has inducted a diesel-electric submarine that was previously part of China's People’s Liberation Army Navy.

Reports on Monday said the UMS Minye Kyaw Htin was inducted into service on December 24, which also marked the 74th anniversary of the establishment of Myanmar's Navy.

In December 2020, the Indian Navy transferred a Russian-built submarine, the INS Sindhuvir, to Myanmar. Sindhuvir, which was a Russian Kilo class design, had been renamed UMS Minye Theinkhathu by Myanmar.

The Irrawaddy, a news outlet run by Myanmarese exiles, reported on Monday “The deal to purchase the Ming-class submarine was reached in secret with Beijing over the past year. In the past, Myanmar is believed to have balked at a Chinese condition that its technicians be allowed to maintain any vessels it provides. It is not clear whether this condition was attached this time.”

Myanmar has been mulling purchase of submarines for over a decade. China's Global Times had criticised Myanmar for taking up the Indian Navy offer of the Sindhuvir. The Global Times claimed in October 2020 “India wants to get rid of a retired and outdated submarine”. The publication claimed “Although India said that the submarine could serve the Myanmar army to at least 2030 after refitting, Chinese analysts doubted the submarine's functionality, as it had served in Indian army for more than 30 years, entering the end of a submarine's life - and the refitting only gave it refurbishment, but did not upgrade its system and facilities.”

Analysts had attributed the Chinese criticism to the rivalry between Beijing and New Delhi for influence with Myanmar’s military.

The Irrawaddy added that with two submarines in its fleet, Myanmar was in negotiations with Russsia to “acquire one of its Project 636 Improved Kilo submarines”. The Project 636 class is an improved derivative of the original Kilo class design.