So far, tens of thousands of people have been killed in the conflict 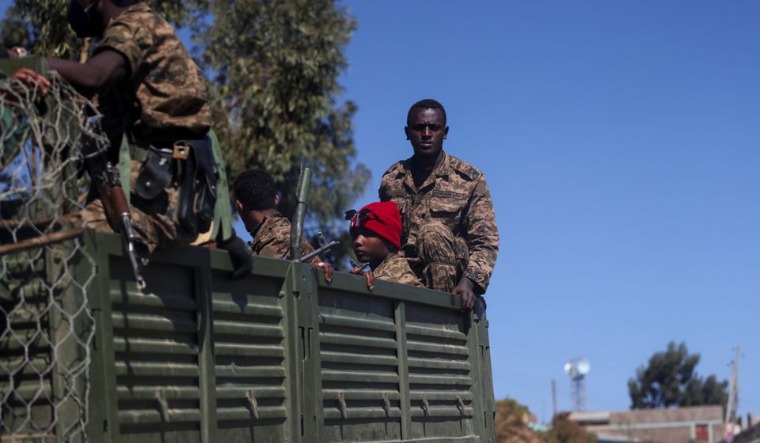 Ethiopian soldiers ride on a truck near the town of Adigrat, Tigray region, Ethiopia, March 18, 2021 | Reuters

The UN, on Tuesday, said that it is temporarily relocating families of international staff from Ethiopia due to the security situation. UN spokesman Stephane Dujarric told Reuters, “We will continue to monitor the situation as it evolves, keeping in mind the safety of our staff and the need to continue to stand and deliver and to continue operations and support all the people that need our assistance,” Dujarric said.

Citizens of the US, France and Germany have called on to leave the conflict-ridden nation immediately. Ethiopia PM Abiy Ahmed said he would lead his country’s troops “from the battlefront”, the latest development in a year-long war with rebel groups.

The Nobel Peace prize winner wrote on Twitter: “I will mobilise to the front to lead the defence forces. Those who want to be among the Ethiopian children who will be hailed by history, rise up for your country.”

So far, tens of thousands of people have been killed in the conflict between the Ethiopian and allied forces and fighters from the country’s northern Tigray region.

The Tigray People's Liberation Front rebel group has pushed closer to Addis Ababa, seizing possession of the town of Shewa Robit, which is only 220 kilometres north of the capital by road. The United States and others have warned that Africa's second-largest country could fragment and destabilise the whole Horn of Africa. Last November, however, he dispatched troops to Ethiopia's northernmost Tigray area in an attempt to destabilise the TPLF, claiming that the move was prompted by TPLF attacks on army facilities. It's also forged ties with other insurgent groups, such as the Oromo Liberation Army, which operates in the Oromia area outside Addis Ababa.

Fears of a full-blown-out clash have prompted countries like the US and the UK to pull out non-essential diplomatic staff.

Jeffrey Feltman, a US envoy, said he sees significant progress in discussions with Ethiopia's warring parties, but he is concerned that it may be overtaken by frightening military developments in the year-long conflict in Africa's second-most populous country. The Tigray soldiers must halt their approach on the city, according to Feltman, who also cautioned that their demands may rise as they come closer.

Before Abiy gained president in 2018, Tigray forces had long dominated the national administration. Feltman added, "I have my doubts about that assurance." Feltman was also heartened by Abiy's willingness to discuss in detail how a diplomatic path to end the conflict may work.

There's no sign there would be direct talks on the horizon between the two sides, nor is that necessary, Feltman told Reuters, saying there are a whole lot of ways to have political processes including proximity talks. Pressing issues include access to deliver humanitarian aid to Tigray. Aid to a growing number of people in the neighbouring Amhara and Afar regions has been blocked due to fighting.