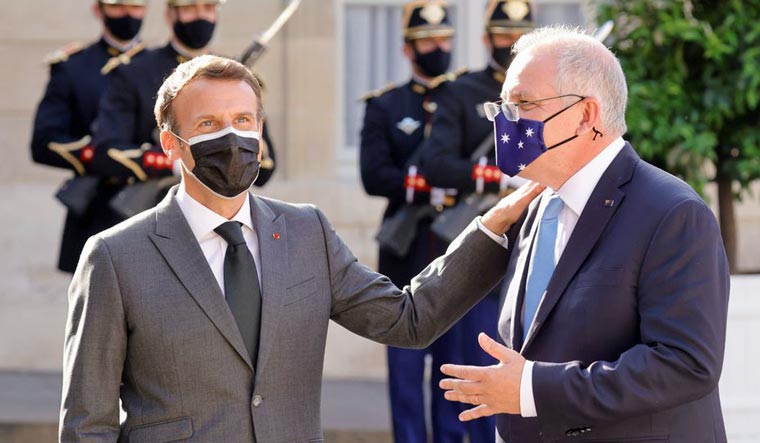 France's ambassador to Australia, Jean-Pierre Thebault, said on Wednesday that Australia acted with deceit when it abruptly cancelled a multi-billion dollar deal with France to build a fleet of submarines.

"And because there was far more at stake than providing submarines because it was a common agreement on sovereignty, sealed with the transmission of highly classified data, the way it was handled was a stab in the back," Thebault told Reuters.

Australia, in September, after withdrawing from the agreement with France, opted to build eight nuclear-powered submarines in a deal with the United States and Britain, under a new alliance dubbed AUKUS. The decision resulted in a major rift, with France recalling its envoys from Australia and the US.

Morrison attacked the credibility of Macron as a newspaper quoted a text message that suggested France anticipated bad news about a now-scuttled submarine deal.

The leaked message were published as a counter to France's claim that Paris wasn't given sufficient notice that the contract would be cancelled.

After Morrison's office attempted to get in touch with Macron about the submarine contract on September 14, two days before the deal with the US and Britain was announced,  Macron in a message to Morrison wrote, "Should I expect good or bad news for our joint submarines ambitions?" Morrison's response to the text wasn't leaked.

An Australian newspaper cast doubt on US President Joe Biden's explanation to Macron last week that Biden thought the French had been informed long before the September announcement that their A$90 billion submarine deal with Australia would be scrapped.

Macron this week accused Morrison of lying to him at a Paris dinner in June about the fate of a 5-year-old contract with Naval Group of France to build 12 conventional diesel-electric submarines.

Morrison said Macron's accusation of lying, which the prime minister denies, was a slur against Australia. Most Australian observers see it as a personal insult against Morrison. Australian Defence Minister Peter Dutton confirmed that the US and Britain were kept informed on Australia's dealings with France, saying the three nuclear-propulsion allies worked very closely together in lockstep.

Biden acknowledged that the handling of the new alliance was clumsy, but he thought that France had been informed in advance of the cancellation of the agreement.