Myanmar is now in conflict, could be failed state: UN envoy

'The repression of the military has led to more than 1,180 deaths' 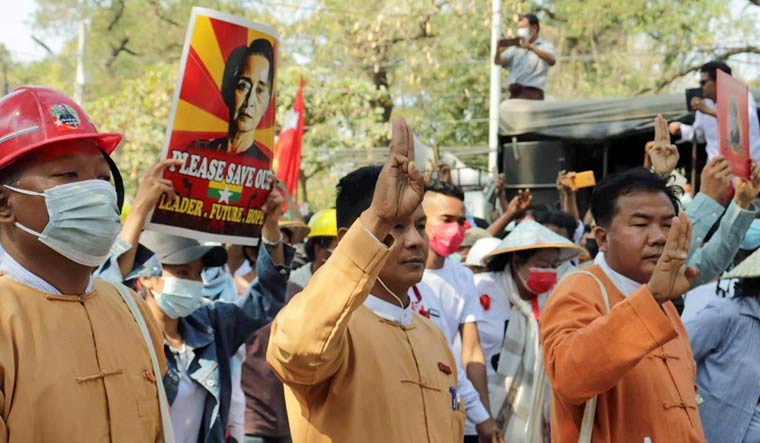 The UN special envoy for Myanmar has warned that February's military takeover has led to armed conflict and if power isn't returned to the people in a democratic way the country “will go in the direction of a failed state”.

Christine Schraner Burgener told a UN news conference Thursday that conflict between the military, which took power on Feb 1, and civilians and ethnic minorities is intensifying in many parts of the country.

“The repression of the military has led to more than 1,180 deaths,” she said. “The army uses a range of tactics against civilian populations, including burning villages, looting properties, mass arrests, torture and execution of prisoners, gender-based violence and random artillery fire into residential areas.”

Schraner Burgener said the military is conducting clearing operations in Chin and several other states and there is continued fighting in Kachin and Shan states, “so all over the country we have a huge scale of violence”.

She said the situation is reminiscent of the pattern of operations that the military, known as the Tatmadaw, used against Rohingya Muslims in northern Rakhine state in 1997. The Rohingya were first targeted by Myanmar's security forces in 1997-98 and over 700,000 fled to neighbouring Bangladesh after a military crackdown in 2017.

Schraner Burgener said the movement against the military is now “increasingly militarised,” with the so-called National Unity Government formed by supporters of the ousted democratic government led by Aung San Suu Kyi seeking to mobilise a greater number of Peoples Defence Forces and calling for “a people's defence war".

“Clearly, in the absence of international action, violence has been justified as the last resort,” she said.

Myanmar for five decades had languished under strict military rule that led to international isolation and sanctions. As the generals loosened their grip, culminating in Suu Kyi's rise to leadership in 2015 elections, the international community responded by lifting most sanctions and pouring investment into the country.

Schraner Burgener warned that “the overall situation in Myanmar continues to deteriorate sharply". She said the conflict must be solved and that “the power must be returned to the people in a democratic way,” but the military did not respond to her proposal for an inclusive national dialogue and appears intent on continuing its operations.

In the past, the Tatmadaw would use violence against ethnic armed groups or against the Rohingya but not against the Buddhist Bamar ethnic majority, but that is happening now on a large scale in the central part of the country, she said.

Schraner Burgener said she wouldn't call the current situation a civil war because that's not “international legal terminology,” but she said that with violence spreading across Myanmar it is “an internal armed conflict”.

“If this situation will continue, then I would say we would have a full blown internal armed conflict,” she said.

Looking at the dire situation on the ground, she said, the number of displaced people has increased from 370,000 to 589,000 since the military takeover, the number of people needing humanitarian assistance has jumped from 1 million to 3 million, and the health system and banking system have collapsed.


But unlike the coup in 1998 when people were killed or put in prison or gave up, and the Tatmadaw took over and conducted business as usual, “people will, in my view, not give up” now, she said. “The people continue to resist. They will not go back to work. They will continue to use violence.”

Schraner Burgener said the UN has heard that 4,000 soldiers have defected, a figure it can't verify, “but even if it's 3,000 it's quite a huge number.”

Every day, she added, she receives messages from people on the ground saying they "would rather like to die than to accept a new military dictatorship”.

She said targeted sanctions against the Tatmadaw can have an effect, especially if adopted by more countries.

As for recognition of the military junta, Schraner Burgener said the nine-member General Assembly credentials committee, which is expected to meet in November, will decide whether it takes over Myanmar's UN seat now held by the ambassador appointed by Suu Kyi's government.

“What is very important now from the international community, but also from the UN, is that we don't give any signals or make some movements which could be seen as accepting” the military junta's State Administration Council that is running the country, she said.

“We want to respect the will of the people,” she stressed, noting that that was done last November when Suu Kyi's party won 80% of the vote.

Schraner Burgener said the decision of the 10-nation Association of Southeast Asian Nations not to invite the junta leader, Senior Gen. Min Aung Hlaing, to their upcoming summit is “a clear signal that they also agreed together that the current situation is unacceptable”.