Attacks on Hindus and their temples have intensified in Bangladesh 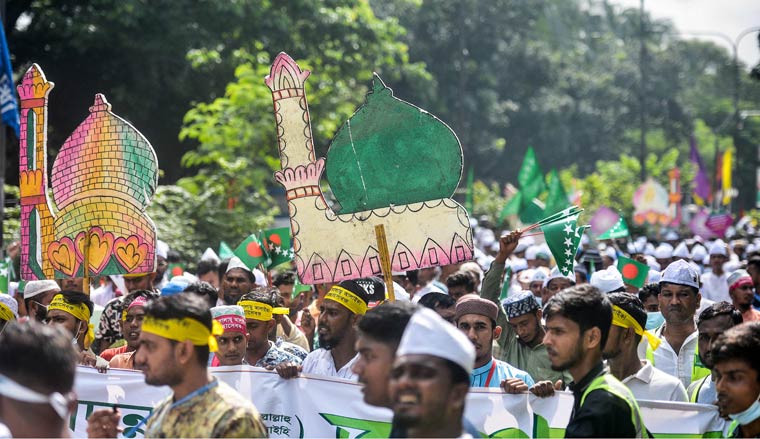 Muslim devotees take part in a rally to mark Eid-e-Milad-un-Nabi, the birthday of the Prophet Mohammad, in Dhaka | AFP

People across Bangladesh on Wednesday observed three festivals of Muslims, Hindus and Buddhists simultaneously amid communal tension in the country reaching an extreme high following mob attacks on the Hindu community and vandalisation of temples and idols during Durga Puja festivities.

Thousands of Muslims vowed to uphold interfaith harmony in a mammoth rally of Eid-e-Milad-un-Nabi, marking the anniversary of the birth of Prophet Hazrat Muhammad, which coincided with the Hindu festival of Kojagori Lakshmi Puja and Buddhists' Probarana Purnima.

“We will not allow religious extremism, militancy and communalism,” they said at the rally organised here by Islamic spiritual centre Maizbhandar Darbar. Senior ministers, politicians, foreign diplomats, Islamic scholars and sufis participated in the rally.

Attacks on Hindus and their temples have intensified in Bangladesh since last Wednesday after an alleged blasphemous post surfaced on social media during the Durga Puja celebrations. On late Sunday night, a mob damaged 66 houses and set on fire at least 20 homes of Hindus in Bangladesh.

Maizbhandar Darbar head Syed Saifuddin Ahmed said the Miladunnabi came this year as an extra-ordinary occasion to uphold interfaith harmony in line with Quran’s directives and the Holy Prophet’s teachings.

Ahmed said according to the Quran and the Prophet those who attack temples and places of worship of other religions are disqualified to be Muslims.

Meanwhile, Hindus across the country celebrated Kojagori Lakshmi Puja, which is observed on the next full-moon night after the end of Durga Puja, and Buddhists celebrated their annual Probarana Purnima festival, marking the conclusion of the three-month-long seclusion of monks inside their monasteries for self-edification and atonement of their defilement.

“This is a coincidence that the festivals of three religions are being observed on the same day in the same neighbourhoods. I take it as a divine indication to uphold the interfaith harmony as everyone belongs to the same creator,” Hindu community leader Kajol Debnath told PTI.

“We want to be imbued with the spirit of peaceful coexistence from this coincidence,” he added.

According to an official account, at least five people were killed in the recent communal clashes in the country. Unconfirmed reports suggest the casualty figures to be as high as seven.

Police said over 450 suspected temple attackers were arrested so far in different parts of the country and a manhunt was underway to track down more since Wednesday.

On Tuesday, Bangladesh Prime Minister Sheikh Hasina instructed her home minister to initiate immediate action against those who incited violence using religion as she asked the people not to trust anything on social media without fact-checking.

The Bangladesh Hindu-Buddhist-Christian Unity Council said at least 70 puja pavilions and temples were attacked, sparking reactions at international levels with the United Nations and the United States condemning the violence.

UN resident coordinator in Dhaka, Mia Seppo, in a statement said recent attacks on Hindus in Bangladesh fuelled by hate speech on social media are against the values of the Constitution and need to stop.

“We call upon the government to ensure protection of minorities and an impartial probe. We call upon all to join hands to strengthen inclusive tolerant Bangladesh,” she said.

The foreign ministry said in a statement that domestic elements that opposed Bangladesh's independence from Pakistan 50 year ago were still propagating their "toxic narratives to instigate violence, hatred and bigotry”.

The statement underlined that the Government of Bangladesh "unequivocally condemned those incidents and took serious note of the reactions from within and outside the Hindu community."

Hindus make up some 10 per cent of the Muslim-majority Bangladesh's 169 million population. There have been reports of violence against Hindus in the country over the years. The violence included vandalism of and setting fire to houses, shops and businesses of the Hindu community, rapes and sexual assaults.