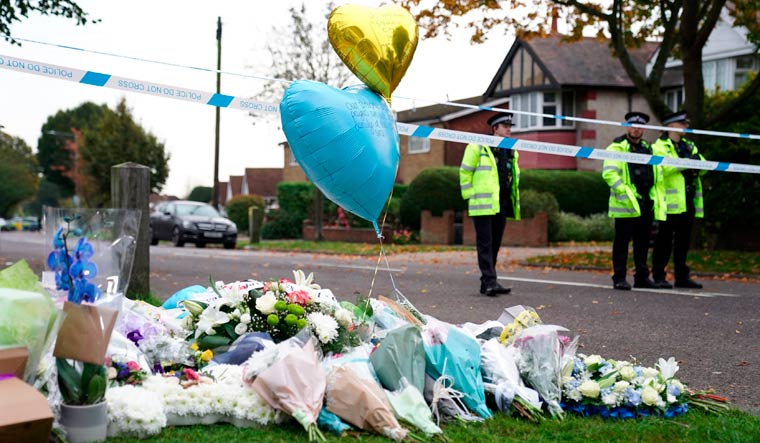 Leigh-on-Sea: Police officers stand by the scene near Belfairs Methodist Church in Eastwood Road North, where member of Parliament David Amess died after he was stabbed several times on Friday, in Leigh-on-Sea, Essex, England | AP

The terror suspect who was arrested over the killing of Conservative MP Sir David Amess has been identified by British media as the son of a former aide to the Somali prime minister.

Ali Harbi Ali, 25, is the son of Harbi Ali Kullane, who had earlier worked as director of communications in the prime minister's office in Somalia. His father has been questioned by police, who have also taken his phone for analysis.

"I'm not OK. I'm traumatised… This is nothing to do with my work for the Somali government," his father was quoted as saying by the Sunday Times.

The 25-year-old suspect was initially arrested under murder charges and was later detained under the Terrorism Act. He was reportedly referred to the counter-terrorism"Prevent" scheme a few years ago, but was never a formal subject of interest to MI5, the BBC reported.

The Prevent scheme is part of the UK's CONTEST strategy devised in the years after 9/11. Under Prevent, the government seeks to deter would-be terrorists by combating their ideology, supporting those who are vulnerable to becoming radicalised and running a de-radicalisation programme led by the police and "liberal Muslim" mentors. According to the UK Home Office, "In the year ending on March 31, 2020, there were 6,287 referrals to Prevent"--a 10 per cent increase from the previous year. Of the 1,424 cases discussed at a Channel panel, 210 (30 per cent) were of Islamic radicalisation.

Sir David Amess was stabbed during a meeting with constituents at a church in Leigh-on-Sea, Essex, on Friday. The knife used in the attack was recovered at the scene.

Amess is survived by four daughters and a son. He is the second MP to be killed in recent years, following the murder of Labour MP Jo Cox in June 2016.

The incident has sparked calls to increase MP security. However, the Home Office Home Secretary Priti Patel has called for security measures to be proportionate, telling the BBC, "We're here to serve, we're here to be accessible to the British public".