No arrests have been made so far 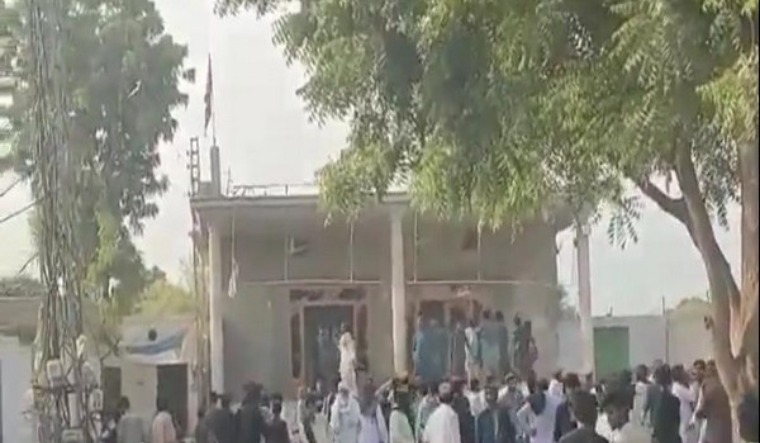 A group of Muslim mob attacked a Hindu temple in Punjab province of Pakistan, burning down parts of it and damaging idols.

After the failure of police to prevent the criminal act, the Pakistan Rangers have been called to control the situation.

Police said the mob attacked the temple on Wednesday, August 4, 2021, at Bhong city of Rahim Yar Khan district, some 590 km from Lahore, in reaction to alleged desecration of a Muslim seminary.

An eight-year-old Hindu boy last week had allegedly urinated at a library of the seminary in the area that caused tensions in Bhong, where Muslims and Hindus have been living peacefully for decades.

On Wednesday, ruling Pakistan Tehreek-i-Insaf parliamentarian Dr Ramesh Kumar Vankwani posted videos of the temple attack on his Twitter wall, requesting law enforcement agencies to rush to the spot to stop its "burning and vandalising".

In a series of tweets, he said, "Attack on Hindu temple at Bhong City District Rahimyar Khan Punjab. Situation was tense since yesterday. Negligence by local police is very shameful. Chief Justice is requested to take action." Dr Vankwani further said, "Strict action must be taken against those who attacked Hindu temple at Bhong. In contact with higher authorities. Situation is very critical right now." "Chief Justice is requested to take action, please. Interfaith harmony is need of time," he wrote.

According to District Police Officer (DPO) Rahim Yar Khan Asad Sarfraz, the law enforcement agencies have controlled the situation and managed to disperse the mob. "Rangers have been called and deployed around the Hindu temple," he said.

The DPO further said that some 100 Hindu families are living in the area and police have been deployed there to thwart any untoward incident.

He said no arrest has been made so far.

"Our first priority is to restore law and order and provide protection to the minority community," Sarfraz said.

Another police official said the temple has been damaged badly.

"The attackers were carrying sticks, stones and bricks. They smashed the deities while raising religious slogans," he said, adding a part of the temple was burnt down, which Dr Vankwani also confirmed.

The police officer said the minor Hindu boy who allegedly desecrated the library of the seminar in Bhong Sharif was arrested last week and booked under the blasphemy laws but subsequently released on bail for being a minor.

On Wednesday, he said after a social media post inciting people of Bhong to take revenge of desecration, the mob started gathering outside the temple and attacked it.

"We will arrest those miscreants who incited people to attack the temple," DPO Sarfraz said.