The 435.5km Lhasa-Nyingchi line was inaugurated on June 25 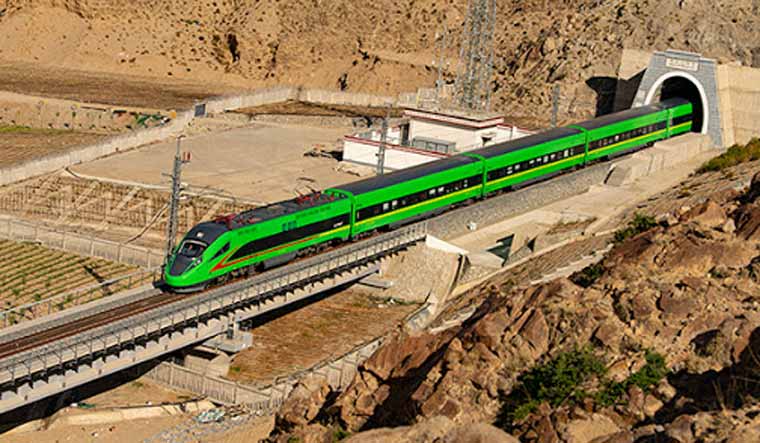 Little over a month ago, China began operations of a bullet train that connects Lhasa, the capital to Tibet, to Nyingchi, a border town close to Arunachal Pradesh.

The 435.5km Lhasa-Nyingchi section of the Sichuan-Tibet Railway was inaugurated on June 25 ahead of the centenary celebrations of the ruling Communist Party of China (CPC) on July 1.

The Lhasa-Nyingchi line has been considered a key project by the Xi Jinping government. During his much-publicised visit to Tibet in late July, President Xi went to the Nyingchi railway station and took stock of the railway infrastructure work there. China refers to Arunachal Pradesh as South Tibet and does not acknowledge Indian sovereignty over the state.

On Wednesday, Chinese media highlighted the fact that the Lhasa-Nyingchi bullet train was not just a mere passenger transport system. China's Global Times reported the the bullet train was used by the People's Liberation Army (PLA) to transport troops for the first time.

Quoting a website affiliated to the PLA, Global Times reported, "New recruits at a combined arms brigade affiliated with the PLA Tibet Military Command recently took a Fuxing bullet train on the railway to an exercise field at an elevation of 4,500 meters." While the location was not specified, the reference to the altitude of the exercise (4,500 metres) has previously been used to hint at locations close to the border with India.

Highlighting the role of the Fuxing bullet train,the publication claimed the exercise marked "another step forward on the systematic development of China's military transport". The bullet train cuts the travel time from Lhasa to Nyingchi to three-and-half hours, almost half the duration needed to travel by road.

Moreover, the publication added that given the harsh weather, terrain and altitude in Tibet, road travel would make troops vulnerable to fatigue, while "aircraft sometimes cause altitude sickness in plateau regions and have limited transport capacity". A bullet train, on the other hand, overcomes most of these problems.

Having a bullet train, in addition to road and air transport, boosts China's options to rush forces to border areas. In late July, Global Times reported the Fuxing bullet train had carried “106,000 passenger trips with a daily average of 3,500 during its first month of operation”.