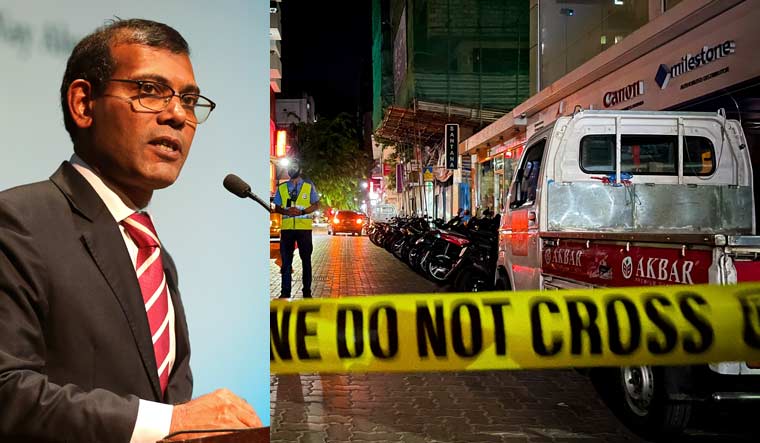 Maldives President Mohamed Nasheed delivers a lecture on climate change in New Delhi, India. Nasheed has been injured in a blast Thursday, May 6, 2021 near his home and was being treated in a hospital in the capital, police said | AP

Former Maldives President Mohamed Nasheed, who was critically wounded in an explosion, was released from the hospital on Thursday and flown to Germany for further treatment, his family and the hospital said.

Nasheed, 53, was wounded in the blast last week that authorities blamed on Muslim extremists. Two of his bodyguards and two apparent bystanders, including a British citizen, were also wounded by what police say was a homemade explosive device containing ball bearings attached to a motorbike parked near the ex-president's car.

He underwent surgeries to his head, chest, abdomen and limb.

On Thursday, ADK Hospital in Male said Nasheed was released and was traveling overseas for rehabilitation and recovery. His brother, Nazim Sattar, said Nasheed flew to Germany.

Under heavy security, Nasheed was brought to the airport in an ambulance and left on a special flight.

He was the first democratically elected president of the Maldives, serving from 2008 to 2012, when he resigned amid protests. He was defeated in the subsequent presidential election, and was ineligible for the 2018 race due to a prison sentence, but has remained an influential political figure.

He currently serves as speaker of Parliament.

Nasheed has been an outspoken critic of religious extremism in the predominantly Sunni Muslim nation, where preaching and practicing other faiths are banned by law. He has been criticized by religious hard-liners for his closeness to the West and liberal policies.

Police say they have arrested three out of four suspects in connection with the blast and are searching for the remaining one.

Officials blamed Islamic extremists for the attack, although investigators didn't identify any group.

The Indian Ocean archipelago is known for its luxury resorts but has experienced occasional violent attacks. In 2007, a blast in a park in the capital wounded 12 foreign tourists, and was also blamed on religious extremists.