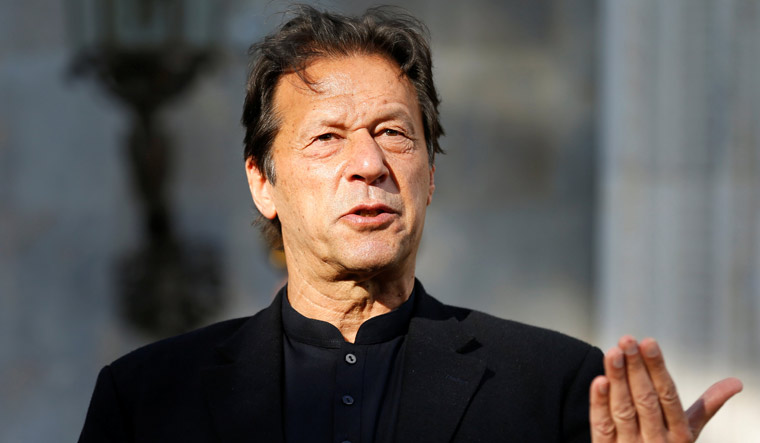 Prime Minister Imran Khan said on Tuesday that Pakistan would not hold talks with India until New Delhi reverses its decision of scrapping the special status of Jammu and Kashmir.

India abrogated the special status of Jammu and Kashmir under Article 370 on August 5, 2019 and bifurcated it into two Union territories.

"Unless India retreats from the steps taken on August 5, the Pakistani government will not talk to India at all," Khan said while responding to questions from the public during a live broadcast session.

Earlier in the day, Foreign Minister Shah Mahmood Qureshi said that no talks presently were taking place with India but parleys could be held if New Delhi revisited its policy regarding Kashmir and provided relief to the people of Kashmir.

"Jammu and Kashmir cannot be an internal issue of India as it is on the agenda of the UN and there are several Security Council resolutions on it, he said while addressing a news conference in Islamabad.

India has repeatedly said Jammu and Kashmir is an integral part of India and the country is capable of solving its own problems.

New Delhi has told Islamabad that it desires normal neighbourly relations with it in an environment free of terror, hostility and violence.

Indo-Pak relations deteriorated after India announced withdrawing special powers of Jammu and Kashmir and bifurcation of the state into two union territories in August, 2019. India has maintained that issue related to Article 370 of the Indian Constitution was entirely an internal matter of the country.

However, lately, there has been some improvement when the two countries agreed in February to restore peace on the Line of Control. It is said that the rival officials have been interacting through the backchannel diplomacy to ease tension.

Khan also responded to several questions about domestic issues and defended the performance of his government which came to power in August 2018.