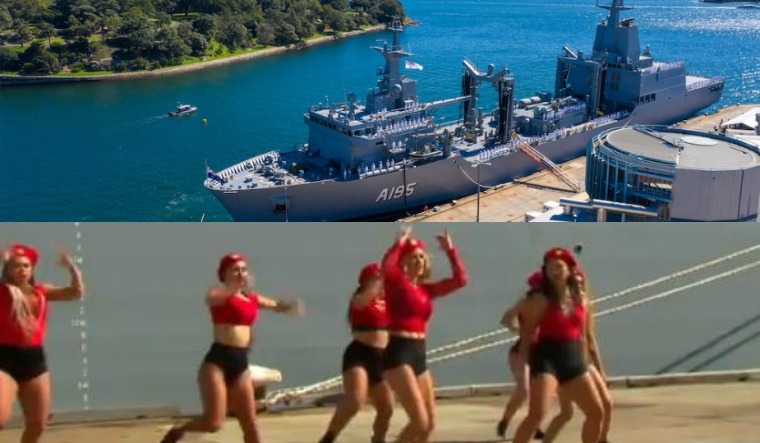 Ceremonies in defence forces the world over are mostly associated with tradition. This is usually in the form of speeches, symbolic passing of batons or raising of flags.

But the Royal Australian Navy and the Australian Defence Force have been at the receiving end of withering criticism ever since the commissioning ceremony of the HMAS Supply, an auxiliary vessel, in Sydney on April 10.

For the commissioning ceremony of the HMAS Supply, a group of seven woman dancers performed, dressed in shorts, crop tops and berets. Their moves included twerking and gyrating, which according to reports, left officials stunned.

In attendance for the commissioning ceremony of the HMAS Supply were the governor-general, who is the queen's representative, and chief of the ADF.

Philip Thompson, the MP representing Herbert in Queensland, was quoted by ABC as saying the Australian Defence Force had moved "too far to the left" in its social agenda in recent years.

"Our ADF shouldn't be left or right; they should be straight down the middle of what their job is, and their job is to defend our nation, our interests, our values, our sovereignty, but also when we go on operations, have an unapologetic aggression and violence to get the mission done," Thompson was quoted as saying by ABC. Thompson is a former soldier.

Questioning the need for the dancers, Thompson declared, "Standards in the ADF, and definitely when commissioning a ship, should be a little bit higher than that."

Thompson praised Defence Minister Peter Dutton for trying to bring back "core values" of the ADF. "Having Minister Dutton at the helm and leading our Australian Defence Force, we're bringing back our core values—we've gone a little bit woke over the past few years and we can't afford to be doing that," Thompson was quoted as saying by ABC.

Amid the outrage over the twerking display, Assistant Defence Minister Andrew Hastie wrote in a newsletter that the "core business" of the ADF "will always be the application of lethal violence in the defence of our values, sovereignty and interests. We should never forget that."

Highlighting the need for 'mission clarity' in the Australian Defence Force, Hastie was quoted by ABC as saying, "Without it, confusion grows—confusion about role, identity and purpose. And confusion is deadly on the battlefield, at sea or in an aerial dogfight." Hastie is also a former soldier, who served in the elite Special Air Service commando unit.

The Australian Defence Force attempted to deflect criticism over the incident.

Daily Mail Australia on Wednesday quoted an ADF spokesperson as saying “HMAS Supply and the Royal Australian Navy are committed to working with Australians from all backgrounds in actively supporting local charities and community groups... The dance was performed prior to the commencement of the Commissioning formalities and prior to the arrival of His Excellency the Governor General, Chief of Navy and Commander Australian Fleet.”

According to the Royal Australian Navy, the HMAS Supply is intended to “carry fuel, dry cargo, water, food, ammunition, equipment and spare parts to provide operational support for the deployed naval or combat forces operating far from the port on the high seas for longer periods”.