India asks US to probe vandalism of Mahatma Gandhi statue 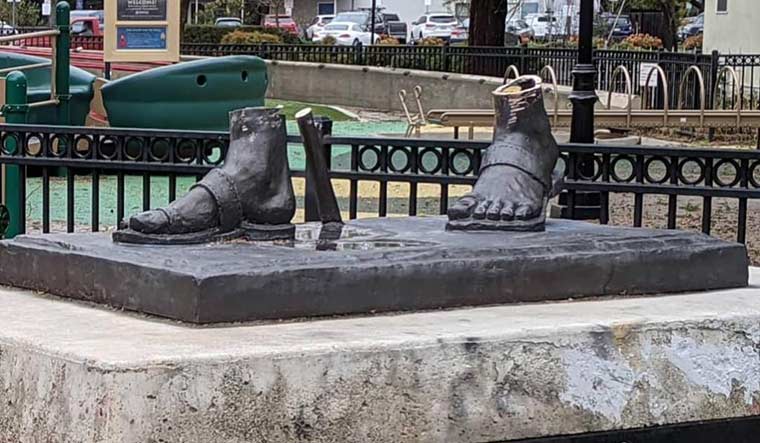 An image of the vandalised statue in Davis, California

India has asked the US to conduct a thorough investigation into the vandalism of Mahatma Gandhi's statue in California that happened in January. The six-feet-tall statue in Central Park of the city of Davis appeared sawed off at the ankles and the face severed, according to news reports on January 28. The statue had been donated by the Indian government four years ago.

In a reply to a question in Parliament, the Minister of State for External Affairs V. Muraleedharan said India had “strongly condemned this malicious and despicable act''. The Indian Embassy has taken up the matter with the US Department of State for a thorough investigation into the incident and appropriate action against those responsible for this despicable act. “The Consulate General of India in San Francisco has separately taken up the matter with the City of Davis and local law enforcement authorities, which have initiated an investigation,'' he said.

The US State Department has called the vandalism “unacceptable'', according to the minister and expressed “hope that the perpetrators would be brought to justice as quickly as possible”. An investigation is also being conducted by the local police.

The vandalism in Davis sparked outrage among Indian-Americans. While the institution of the statue in the park in Davis had met with opposition from Organisation for Minorities in India, the town had voted for it. The Indian government is not the only one to have called for a full-scale investigation into the matter. Raja Krishnamoorthi, an Indian-American Congressman, has asked for an FBI probe into the incident, describing it as a “possible hate crime to intimidate Indian-Americans”.

“The desecration of a statue of Gandhi, who championed peace and non-violence and who continues to influence countless non-violent struggles for justice including in America, serves as a sad reminder of how important his teachings remain,'' Krishnamoorthi was quoted as saying in a statement reported by agencies.