'India will become cannon fodder for US': Chinese media on Quad summit 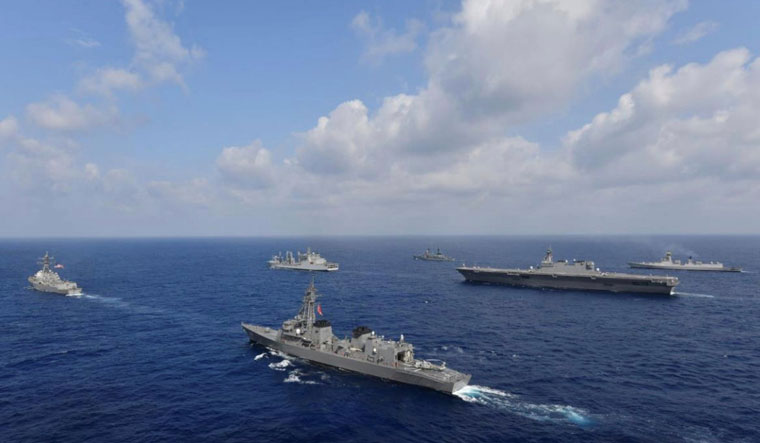 Prime Minister Narendra Modi will on Friday evening joins his counterparts from the US, Australia and Japan for a meeting of heads of government of the Indo-Pacific grouping, referred to as the 'Quad'.

The Quad grouping has emerged in recent years as a response to increasing assertiveness and economic expansionism of China.

Not surprisingly, Beijing has been unhappy about the Quad grouping and has repeatedly warned India about it.

On Friday, the Global Times, a mouthpiece of the Chinese government, alleged India had taken China's support for granted.

The Global Times article referred to China's backing for India being the host of this year's summit of the Brazil, Russia, India, China, South Africa (BRICS) grouping.

The Global Times article argued, "It seems India has failed to understand China's goodwill. India takes all support from China for granted. It is, in fact, carrying out a kind of strategic blackmail against China."

The article also referred to India's membership of the Shanghai Cooperation Organisation (SCO) and claimed India's increasing proximity to the US and tension with Beijing had affected efficacy of these groupings.

"BRICS and the SCO have fallen into stagnation since the Doklam standoff in 2017. India has clear demands in the SCO and BRICS. One is anti-terrorism; the other is to use the financial platforms of these groupings, such as the Asian Infrastructure Investment Bank and the New Development Bank, to win as much financial support as possible. But in other respects, India has basically adopted a non-cooperative attitude, which has greatly restricted these groupings' development in recent years. India has become a negative asset of these groupings," Global Times claimed.

The Global Times noted, "India has attached more importance to Quad, and is very sure about its core demands of the US' Indo-Pacific Strategy—to counterbalance, contain and deter China. India fears China will become the dominant force in Asia, and it does not want to see this happen." The article claimed India's growing proximity to the US had "worsened India's relations with China and Russia".

The Global Times claimed India had a place of importance in the Quad. “India is considered by the US as the most important Quad member. The US' strategic goal is to use India to counterbalance and contain China. Quad is likely to expand in the future. No matter how it expands, the regional security structure it wants to establish is exclusive to China and Russia.”

The Global Times warned India against moving closer to the US, noting "India may still want to maintain a swaying state and a balance between the Indo-Pacific and Eurasia. However, the so-called balance does not exist anymore. India is now very inclined toward the US' Indo-Pacific strategy. India is now gradually breaking the balance. If it goes further down this road, it will eventually lose strategic autonomy, completely become the US' hatchet man against China in the Indo-Pacific region, or even cannon fodder."

The article concluded by noting, "There have been many areas where China and India could tap cooperation. India shouldn't play with fire, or it will end up burning itself."