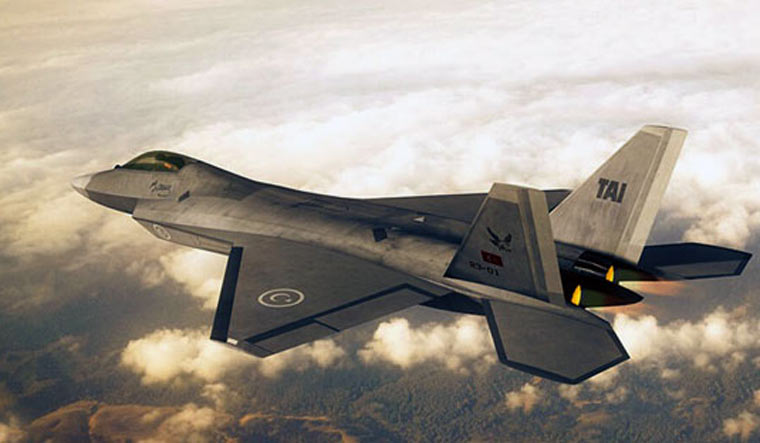 An artist's concept of the TF-X | TAI

Over the past decade, Turkey under President Recep Tayyip Erdogan has adopted an independent foreign policy. Erdogan has aimed to project Turkey as a major industrial and military power in the Middle East and also cultivate strategic ties with prominent Muslim nations.

However, this independent approach to foreign policy has frayed ties with NATO, and in particular with the US, Turkey's main security partner.

In December 2017, Turkey signed a deal worth around $2.5 billion to buy Russia's S-400 surface-to-air missile system, provoking outrage in Washington DC. In 2019, the Donald Trump administration removed Turkey as a partner from the F-35 stealth fighter project and imposed restrictions on deals with Turkish defence companies. Despite the pressure from the US, Erdogan's government has remained defiant in going ahead with the S-400 deal.

On Tuesday, Bloomberg reported that Turkey is pushing to co-manufacture warplanes and missiles with Pakistan. "Turkish defense and government officials have held periodic talks with Pakistani counterparts—the last high-level discussion was in January—about developing and manufacturing military hardware with Pakistan, according to people from both countries who are familiar with the negotiations," Bloomberg reported.

"Turkey sees nuclear power Pakistan as a strategic ally and potential partner in building its Siper long-range missile-defense project and TF-X fighter jet," the report added. According to reports, the Siper is a long-range, high-altitude surface-to-air missile system that can engage both aircraft and ballistic missiles. However, it is the TF-X project that is considered the cornerstone of Turkey's defence modernisation plans.

The TF-X (Turkish Fighter-Experimental) is a stealthy twin-engine fighter jet that Turkey intends to use as the replacement for its vast fleet of F-16 fighters. Turkey received at least 240 F-16 fighters from the US, making it the largest operator of the type after Israel and the US.

The TF-X project was launched in 2011. Turkey intends the fighter to carry indigenously developed radar, missiles and electronics. In 2015, Turkey chose BAE Systems, a UK-based aerospace company, to assist in development of the TF-X. Mock-ups of the TF-X have shown a fighter with 'stealth features' such as internal weapons bays and angled air intakes for the engines.

Initially, Turkey announced plans to fly the first prototype of the TF-X by 2023 and induct up to 250 aircraft. However, the test flight target has slipped to 2025-26. The TF-X project has been hampered by lack of progress in selecting a foreign engine to power initial batches of the aircraft. Turkey aims to develop an indigenous engine for the project.

Selecting an engine is necessary before the aircraft's design is finalised. In 2017, a Turkish company, Kale Group, entered into a $139 million deal with Rolls-Royce to develop an engine for the TF-X. However, the project has seen little progress over technology transfer concerns. Russia has also offered assistance to Turkey for providing engines for the TF-X.

Defence Turkey, a Turkish defence website, has estimated it would cost around $21 billion to develop and produce the TF-X fighter, including $7.3 billion for development alone.

In 2020, Turkey invited Malaysia to join in co-development of the TF-X. Malaysia has industrial capabilities to produce composite material for the skin of the aircraft.

Speaking about the proposal at the time, Temel Kotil, CEO of Turkish Aerospace Industries (TAI), was quoted by Defense News as saying Turkey considered "Indonesia, Pakistan, Bangladesh and Kazakhstan as potential partners or buyers of the future fighter jet". Kotil declared, “[TF-X] will be the first big fighter jet of the Muslims. Building the aircraft first and then selling it is a modality. But we think it’s better if we take in partners at this stage."

Bloomberg noted the apparent aim of the cooperation with Pakistan was to bring "Turkey closer to some of China’s military technology". China has been Pakistan's main strategic benefactor for decades, helping Islamabad build fighter aircraft, missiles, warships, tanks and submarines.

In 2013, Turkey announced a Chinese company had been selected to develop a long-range surface-to-air missile system. However, in 2015, Turkey announced the cancellation of the deal with China, apparently over Beijing's reluctance to transfer technology for the project as well as pressure from NATO allies.

China already has two stealth fighter projects: The J-20 fighter that is in service and the lighter J-31 fighter that is still in development. While China has also faced obstacles in developing aircraft engines, Beijing is beginning to make progress in building indigenous propulsion systems for its warplanes.

Interestingly, Pakistan also has a 'fifth-generation' fighter project under development referred to as 'Project Azm'. However, little is known about progress on the project and given Pakistan's economic and technological limitations, an indigenous project of this magnitude is unlikely to see the light of day. Hence, the offer of cooperation from Turkey may turn out to be appealing to Pakistan.