Global outcry as Putin-critic Navalny jailed on arrival in Russia 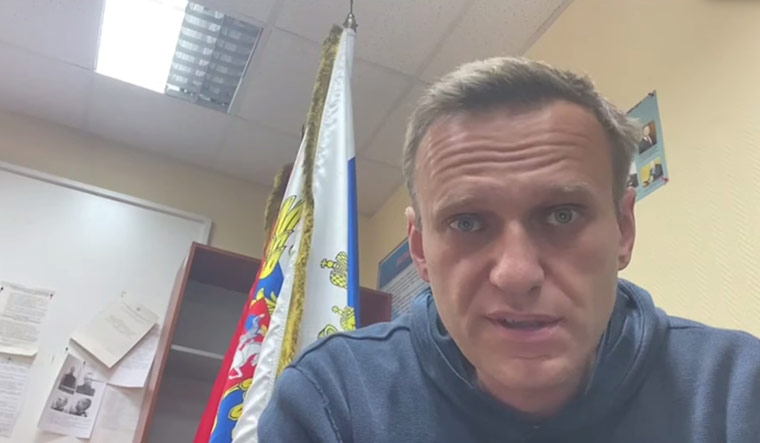 Russian opposition leader Alexei Navalny speaks as he waits for a court hearing in a police station in Khimki outside Moscow, Russia January 18, 2021, in this still image from video obtained from social media | Courtesy of Instagram @NAVALNY/Social Media via REUTERS ATTENTION EDITORS

Following his recovery in Germany five months since he was poisoned by a nerve agent in Siberia, Russian opposition leader Alexei Navalny was arrested on his arrival in Moscow airport, following which a judge sentenced him to 30 days in custody.

Navalny’s arrest has sparked a global outcry as it is seen as a crackdown on President Vladimir Putin’s most fervent critic. The United Nation’s Humans Rights Office called for his immediate release, saying it was “deeply troubled” by his arrested and called for his due process rights to be respected in line with the rule of law.

Amnesty International declared Navalny a “prisoner of conscience” and said it believed the charges against him are “trumped-up”.

Russia’s prison services accuses Navalny for “repeated violations” of his probation period, while Russian prosecutors have also investigated him on fraud charges related to transfers of money to charities including his Anti-Corruption Foundation.

Mr Navalny should be immediately released, and the perpetrators of the outrageous attack on his life must be held accountable, Jake Sullivan tweeted.

The outgoing US secretary of state, Mike Pompeo, said the US strongly condemns the decision to arrest Navalny.

German Foreign Minister Heiko Maas noted that Navalny had returned of his own volition and said "it is completely incomprehensible that he was detained by Russian authorities immediately after his arrival.

“Russia is bound by its own constitution and by international commitments to the principle of the rule of law and the protection of civil rights,” Maas added. “These principles must of course also be applied to Alexei Navalny. He should be released immediately.”

Despite knowing he would likely be arrested on his return to Russia, Navalny was adamant to return home. Navalny was detained at passport control at Moscow's Sheremetyevo airport after flying in Sunday evening from Berlin.