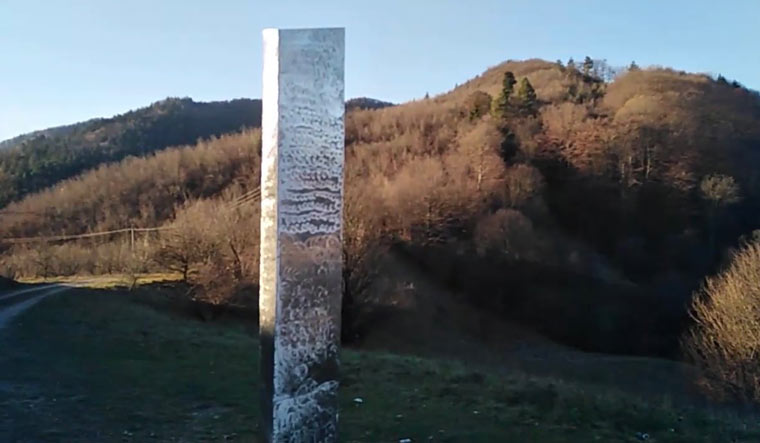 The ‘new’ monolith—if it can be called that—also has a mirrored surface, and appears to have already been covered with graffiti | Twitter

If one were prone to conspiracy theories, it would be easy to see the tale of the disappearing and re-appearing monoliths as 2020’s final act of drama.

After a mysterious metal monolith, discovered in a desert in Utah, made headlines, the structure drew grew public attention—leading to the local landscape getting littered with human waste by tourists disrupting the ecosystem. As curiosity over its origins reached feverish pitch, the monolith disappeared, with the government denying any role in the same.

“We recognize the incredible interest the ‘monolith’ has generated world-wide. Many people have been enjoying the mystery and view it as a welcome distraction from the 2020 news cycle,” ABC4 reported Monticello Field Manager Amber Denton Johnson as saying. “Even so, it was installed without authorization on public lands and the site is in a remote area without services for the large number of people who now want to see it. Whenever you visit public lands please follow Leave No Trace principles and Federal and local laws and guidance.”

Now, a similar looking monolith has appeared in Romania, albeit this one seems to have been hastily constructed.

So the #Monolith first appeared in #Utah and then disappeared yesterday. Then seemingly instantly appeared on the other side of the globe in less than 24 hours in #Romania ?!?!? pic.twitter.com/MrgG3La5vE

The ‘new’ monolith—if it can be called that—also has a mirrored surface, and appears to have already been covered with graffiti.

Given the viral-worthy attention the first monolith garnered, the new one may be a copycat.

It has been noted that the first monolith resembles the work of the artist John McCracken although far more see its resemblances in the monoliths seen in 2001: A Space Odyssey.