Object resembling monolith from 2001: A Space Odyssey had intrigued the world 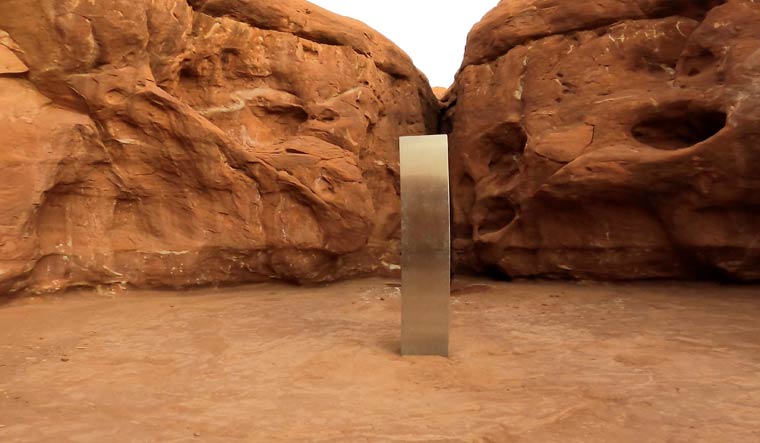 A metal monolith is seen in Red Rock Desert, Utah, U.S., November 25, 2020, in this still image obtained from a social media video | @davidsurber_ via REUTERS

US Officials say a mysterious metallic monolith that was accidentally found during a drone survey of a remote stretch of the Red Rock desert in Utah, a region normally inaccessible to human beings, has now disappeared.

Dubbing the item “private property” the Bureau of Land Management in Utah said it had received “credible reports’ that an unknown party removed the object on Friday evening, adding that the bureau itself did not remove it as it is “considered private property”.

"We do not investigate crimes involving private property which are handled by the local sheriff's office,” AFP quoted the bureau as saying.

The triangular pillar, some 12-feet tall, was spotted on November 18 by officials who were counting the number of bighorn sheep in the area by drone. Utah officials then landed a helicopter on the location and found a “metal monolith installed in the ground” with “no obvious indication of who might have put the monolith there”.

Monolith monolith
In 2001 found in
A space odyssey Utah pic.twitter.com/IwANwrFnVu

When photos of the object were shared, many were quick to point out its resemblance to the monolith seen in the film 2001: A Space Odyssey, which ends up granting humanity the knowledge necessary to build civilisation.

Utah officers, on a routine helicopter flyover stumbled upon a mysterious, shiny, metal monolith in the middle of the desert — leaving everyone baffled...

“Who would do this?” pic.twitter.com/G3MJahE4LN

One user pointed out that the monolith resembles the work of the late artist John McCracken.

For all of you debating the mysterious #monolith found in the #Utah desert, I’m sorry to report it’s likely a piece of art 😉 See https://t.co/fJrZ1lpuiD #utahmonolith it was cool, though, perfect setting. #2001ASpaceOdyssey #kubrick pic.twitter.com/28DccFePeh