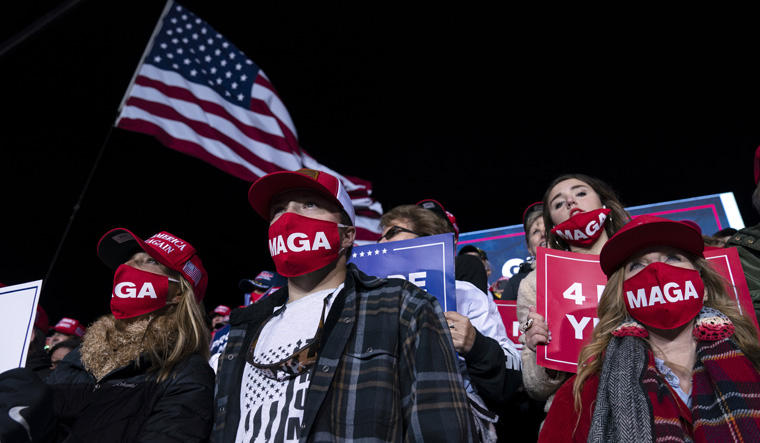 Supporters of President Donald Trump listen to him speak during a campaign rally at Richard B. Russell Airport, Sunday | AP

Stirred into fear by a president who continues to undermine the legitimacy of its election, America, the “gold standard” of democracy, is descending into a dystopian mood that has small and large businesses boarding up ahead of the election, as people do for upcoming hurricanes.

Anxiety over what happens if Trump tells his supporters that the election was a hoax has cities like Madison in Wisconsin preparing, as large cities do, for uncontrollable acts of god. Washington, San Francisco and New York, all reported boarded-up stores. USA Today, The Wall Street Journal, and The New York Times have reported on preparations for violence across the country.

Blocks and blocks of Washington are behind plywood, and people are being told to stock up on food, reported USA Today. The 2020 elections in America will be like no other. “This is not going to end well,” resonates the voice of the president in a re-election rally. Trump refused to commit to a peaceful transfer of power and has continued to undermine the legitimacy of the election. Rally after rally, he consistently refused to accept an election in which he is not the winner, and hinted at his supporters coming to defend him.

The great nation, that has, for more than two centuries, relied on science and technology to lead humanity in achievements like putting a man on the moon, has in its president a science-denier who has incited violence at his rallies and tweets.

A Biden campaign bus was ambushed along a Texas highway by dozens of Trump-flag flying pickup trucks that outnumbered protection, swarming and bumping into vehicles and attempting to run them off the road, which caused the campaign to cancel a planned event in Austin. Trump tweeted a video of the incident with a note, “I love Texas!” The message was clear.

"Violence is a very real possibility," says Barbara Cosner of Indiana. “It is real. Very real… They are hoarding ammo and weapons and talk of it freely in chatter pages,” added the Biden supporter, and then said she was thinking about buying ammunition for her own guns. “I fear for the country,” she said, afraid of the backlash if Biden wins. “There are militias in the rural areas just south of town.”

On the west in Nevada, Lesah Rosario of Henderson says she feels anger and disappointment. “Anger that this crap is still happening and disappointment that more of my privileged friends aren’t speaking out.” She too says she went looking to buy some ammunition. “I am a Hispanic woman, mother to a black woman. I don’t have the luxury of fear,” said Rosario of her preparations in case violence breaks out.

While both sides people are incredibly passionate about the results of the election, white supremacist groups like the Proud Boys have been fundraising and promoting themselves in the wake of Trump’s direct call for them to “stand-down and stand-by” during the first debate. The Boogaloo movement, which seeks a second civil war, has come to widespread visibility.

According to the polls, 90 per cent of Trump voters think that if Biden wins he will turn the country into a socialist state. That plays well with older people who remember the fears of the Cold War and those who escaped Cuba or Venezuela. But, that is not enough for Trump. "If Biden wins there will be no economy, no energy, no heat in the winter, no air-conditioning in the summer,” he tells crowds that make no attempt to hide their anger.

The Fox News echo chamber repeats Trump statements and tweets and continues to repeat them until they sound familiar and eventually people assume them as truth. Democrats, on their part, think that Trump’s behavior over the last four years has shown that he is likely to turn the country into a dictatorship. Groups on the left are preparing to protest if Trump declares a premature victory, recognising such a move as a coup, and aware that the outcome of coups is driven by a push from the public, a lot of people acting very quickly. Others are organising a nationwide effort called 'Protect the Results'.

Trump, on the other side, has recruited citizen poll-watchers, leaving the left worrying about a repeat of the events in Kenosha and Michigan. For his part, Donald Trump Jr has appeared on a video urging supporters “to join an ‘army’ and keep the ‘radical left’ from succeeding in their attempt to ‘steal’ the 2020 election”, referring, without evidence, to millions of fraudulent votes. Indeed, people are really worried on both sides—On the right, the integrity of mail-in ballots; on the left, the attempts to exclude the mail-in vote from counting.

The Republican party continues to work hard on making it harder for people to vote, aware that a larger turnout benefits the Democrats. In Houston, Republicans are suing to throw out some 1,27,000 ballots because the county had made drive-through voting an extension of curbside voting during the pandemic. In the end, measures like that affect those working hard to pay the bills, feed the family, stay safe, and stay afloat. They do not have the privilege of the time to devote to political issues nor the disposable income to load up on guns and ammunition.

“Letter: Dems are terrorists who hate America,” screamed a large headline in the Your View section of auburnpub.com, a letters to the editor-like section of the website for the Auburn Citizen newspaper in Auburn, New York. The letter, by Justin Graf of Auburn, goes on to say: "The Democratic Party are nothing but domestic terrorists…Please, I’d like somebody to prove me wrong. Please. However, before you even try, look up Operation Northwoods. If our own government wanted to attack our own people to have a reason to fight Cuba, what makes you think they won’t or haven’t done it again," in an apparent reference to the explosion of the American ship 'The Maine' in Havana in 1898, an act that sparked the Spanish-American War.

Amid intolerant messages and dehumanisation of the other side, regular people are feeling the rising tension and are worried about a violent response to a Trump loss which could be ignited by a simple tweet by the president to his 85 million Twitter followers. For some time now, people have been disliking and hating others just because they are from the other side, a trend that has led even long-time friends to disconnect their Facebook friendships, unfriending or blocking each other. On the macro level, however, the danger is of actual brawls that could well turn into bloody armed violence.

Neither side says they will start the violence, but both sides are willing to fight if the other side does. Despite the involvement of extremist groups on both sides and white supremacist groups and other hate groups, these events may be driven by people who start from a good place and then end up taking the situation in America to a bad place.

Affinity groups on the left are organising to take to the streets to prevent what they see as a developing attempt to steal the election. Right-wing militias in Michigan say they are afraid of protesters on the left and are preparing to protect their communities. Police departments and National Guard in various states say they are looking at how to keep people safe, and positioning equipment in case it is needed, according to multiple reports in American media.

Regardless of the outcome at the polls, except at Biden or Trump landslide, Americans can expect a tsunami of misinformation which could lead to outbreaks of violence. “I believe this is fear tactics to scare people into not voting,” said Rosario. “There’s only one party threatening to counter the will of the people with violence.”

“As far as for myself, I’m not frightened in the least,” she said. “The threat of civil war doesn’t make sense. If they don’t like who the people choose and they plan on overthrowing the will of the people, the military is on the people's side.”

Disclaimer: The opinions expressed are the author's own and do not purport to reflect those of THE WEEK