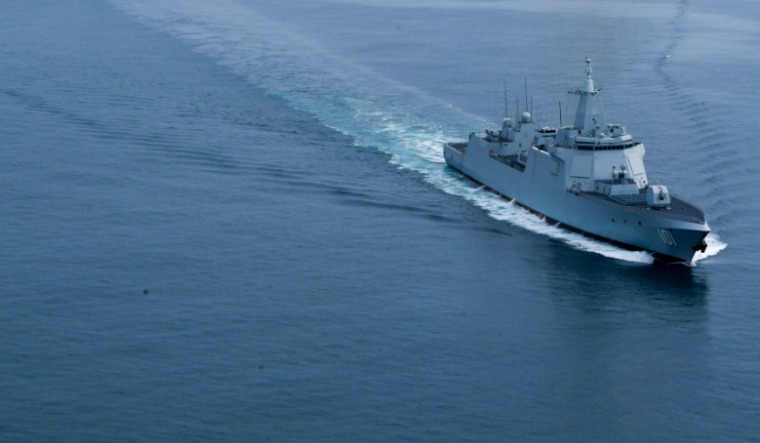 The Nanchang, a Type 055 warship | China's Ministry of National Defense

In January this year, China's People's Liberation Army Navy (PLAN) commissioned the Nanchang, the first ship in a class of large warships called the Type 055 class.

Chinese media and international observers had described the Type 055 class of destroyers as a 'game changer', given its large size and heavy armament.

On Sunday, Chinese state-owned media claimed the radar system on the Type 055 class warships can also detect and destroy satellites in low-earth orbit and stealth aircraft. In the past, China has revealed a number of radars that can track stealth aircraft. This is thought to be the first revelation of an anti-satellite capability.

The Drive, a US defence website, explained the working of the sophisticated dual-band radar system of the Type 055 warships in an article in 2017.

"Two sets of active phased array radars, one being the larger S-band arrays on the vessel's super structure and the other being the smaller set of X-band arrays in the ship's enclosed sensor mast, equip the ship. The S-Band system is used for long range search and track, while the much more sensitive X-band system is used for tracking smaller, stealthier and high-speed objects with greater fidelity at lesser ranges. There are cross-over in capabilities between the two sensor arrays, which also adds to redundancy," The Drive noted.

Global Times quoted Wang Ya'nan, a Chinese defence analyst, as saying "If the radar system has a high enough performance, it can not only detect, but also track the satellite... this means the radar can then guide weapons to attack the satellites." He noted the Type 055 can also transmit information about a target satellite to land-based missile batteries.

China conducted its first publicly acknowledged test of an anti-satellite missile in 2007. Use of ships to destroy satellites is not new. In 2008, a US Navy ship, equipped with the Aegis battle management system, shot down an old spy satellite.

Satellites in low-earth orbits—that is, an altitude of 300km to 500km—have considerable military importance. "Low-earth orbit satellites can monitor vast regions of battlefields and provide rich intelligence to their operators. In wartime, if one side can suppress hostile satellites, it can neutralise a key part of a hostile intelligence source and gain an advantage for itself," Wang told Global Times.

US analysts have warned the Type 055 warships could undertake a variety of new tasks, given their large size, advanced sensors and high-capacity powerplants. This includes being capable of mounting a 'railgun' to fire hypersonic projectiles and carrying surface-to-air missiles to shoot down enemy ballistic missiles. The Pentagon's annual report on China's military modernisation warns the Type 055 could be equipped with anti-ship ballistic missiles, posing a threat to aircraft carriers of the US and its allies.

According to reports, the second ship of the Type 055 class is undergoing sea trials currently and at least six more ships are being built.