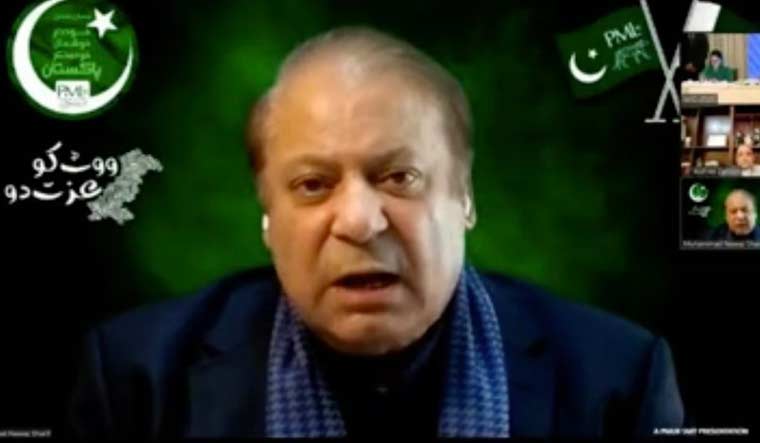 Launching a protest movement against the Imran Khan-led Pakistan Tehreek-e-Insaf (PTI) government as well as his own political comeback, erstwhile Pakistan Prime Minister Nawaz Sharif on Sunday made a serious of explosive charges against the Pakistani Army and Khan government.

Addressing the the All-Parties Conference (APC) hosted by the Pakistan Peoples Party (PPP) via a video link aimed at launching a protest movement against the Khan-led PTI government, Sharif said the Opposition was not against Imran KHan but those who manipulated elections and brought him to power.

"Our struggle is not against Imran Khan. Today, our struggle is against those who installed Imran Khan and who manipulated elections (of 2018) to bring an inefficient man like him into power and thus destroyed the country, he said.

Sharif, 70, pointed out that former prime minister Yusuf Raza Gilani once said that there was "a state within a state" in Pakistan.

"Now its gone beyond that: There is a state above state in Pakistan," Sharif said.

In his address, Sharif urged the armed forces to stay away from the governmental system and said the foremost priority would be to remove the government and this system.

According to multiple reports, Sharif's address—broadcast live on multiple Pakistani TV channels—was muted in parts where he named senior Pakistani generals, including retired Lt. General Asim Bajwa, who now heads the China-Pakistan Economic Corridor Authority. Sharif had alleged that Bajwa was involved in a conspiracy to topple the PML-N government in Balochistan in 2018.

There it goes ! As soon as MNS exposes, names and shames Asim Saleem Bajwa, he is muted!

Nawaz Sharif has made quite a speech on the state within the state in Pakistan calling out the military and security establishment . His audio muted on key TV channels as he named Pakistani generals.

Earlier, Sharif's daughter Maryam had called for Bajwa to face allegations after a recent news report accused the Bajwa family business empire of profiting alongside Bajwa's rise through the military ranks.

Sharif's address comes two days after the Pakistan government issued warrants for his arrest through its London mission.

Sharif, his daughter Maryam and son-in-law Muhammad Safdar were convicted in the Avenfield properties case on July 6, 2018.

Sharif, who was deposed in 2017, was also sentenced to seven years in the Al-Azizia Steel Mills case in December 2018. But, he was bailed out in both cases and also allowed to go to London for medical treatment.

He was given eight weeks to return but failed to come back due to health complications, according to his lawyer.

The three-time premier launched a scathing attack on the ruling party for its failure to address the basic problems of the people.

Sharif, 70, the Pakistan Muslim League Nawaz (PML-N) supremo, has been living in London since November last year after the Lahore High Court granted him permission to go abroad for four weeks for treatment.

On Friday, PPP chairman Zardari talked to him over phone and invited him to virtually attend the Opposition-led All Parties Conference (APC) scheduled to be held on Sunday.

Sharif said that the foremost priority should be to remove this selected government and this system, adding that "if the change is not brought, it will bring irreversible loss to this country."

He asked the powerful Army to stay away from politics and follow the Constitution and vision of the country's father Quaid-e-Azam' Muhammad Ali Jinnah.

"It is very important that our armed forces stay away from our governmental system according to our Constitution and the Quaid's speech, and not interfere with the people's choice. We have made this country a joke in our own eyes and internationally as well," he said.

He asked the leaders attending the conference to make important decisions to change the system of the country, alleging that the current government has enforced martial law in the country.

Sharif reiterated that the vote of people should be honoured which was the only way to save democracy and the country.

He said that military dictators ruled for multiple years but none of the elected prime ministers had been allowed to complete the allotted five years.

Without naming former military dictator Pervez Musharraf, he said that the court did not act against him for suspending the Constitution.

The powerful Army, which has ruled Pakistan for more than half of its 70 plus years of existence, has hitherto wielded considerable power in the matters of security and foreign policy.

Before Sharif, former president Asif Ali Zardari also addressed the conference through a video-link and criticised the government which he said was using the tactics to suppress the Opposition.

It is important that all parties join hands to get rid of this government, he said.

PPP chairman Bilawal is hosting and presiding over the conference with several opposition parties attending it to chalk out a course of action to launch protests against the government.