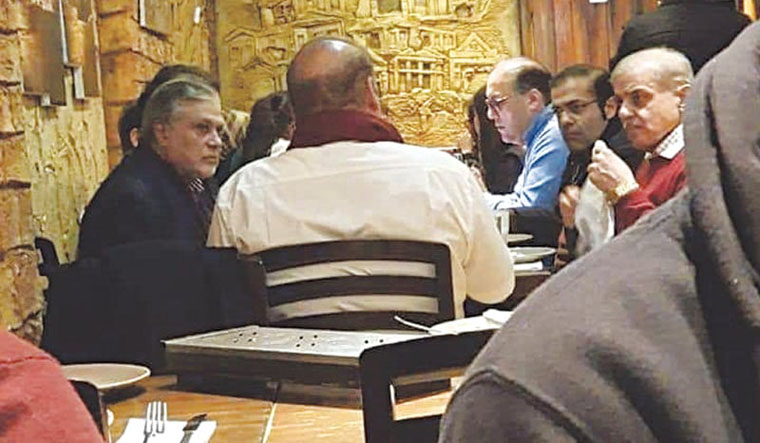 Former Pakistan PM Nawaz Sharif as seen in the picture

A viral image of former Pakistan prime minister Nawaz Sharif in a London restaurant has led to speculations about his health, and taunts from ministers in the Imran Khan government. Science Minister Fawad Chaudhry posted the photo on his Twitter account, with a snide comment: “Treatment against looting is ongoing In London’s intensive care unit, and patients are better.” In the picture, Nawaz's brother Shahbaz, his son Salman, and Nawaz's son Hasan can be seen. Nawaz's face is not immediately visible.

Nawaz was diagnosed with acute immune thrombocytopenic purpura (ITP), a bleeding disorder in which the immune system destroys platelets, before he was shifted to Lodon for intensive care. Nawaz was in the Kot Lakhpat jail but last month he was sent to the custody of National Accountability Bureau (NAB) which is probing the Sharif family in the Chaudhry Sugar Mills case. On December 24, 2018, an accountability court had sentenced Nawaz Sharif to seven years in prison in the Al-Azizia Steel Mills corruption case and acquitted him in the Flagship case. In a short verdict announced, the court said there was concrete evidence against the former premier in the Al-Azizia case and that he was unable to provide a money trail in the case.

However, the opposition PML-N rejected all allegations. A party leader told Dawn, “Doctors have advised Nawaz Sharif to go out for change of environment. They insist that staying indoors will not be good for his health. Therefore, Mr Sharif has started going out. On Sunday, Mr Sharif along with his family members had a walk to catch fresh air and had a tea in a restaurant.”