Muslims of Kashmir, India at end of their patience: Pakistan’s president 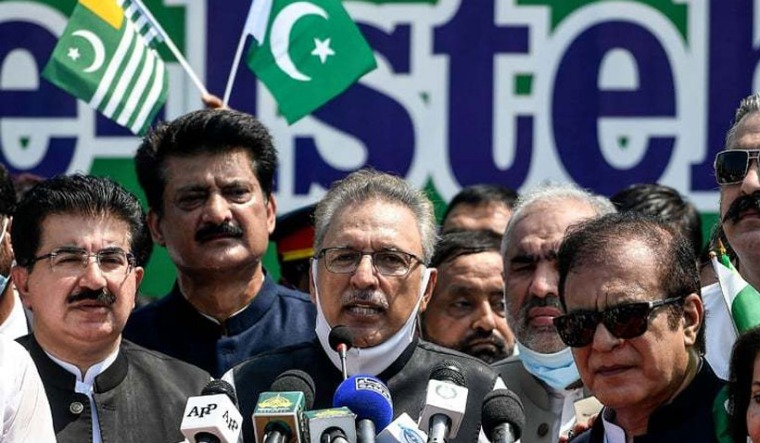 Adopting a provocative tone, Pakistan President Dr Arif Alvi on Wednesday declared his country would help Kashmiris in their "freedom struggle" until their "liberation".

Alvi was speaking at a rally in Islamabad to mark Youm-e-Istehsal (Exploitation Day) being observed across Pakistan to commemorate the first anniversary of abrogation of Article 370 in Jammu and Kashmir. A special session of the Pakistani senate is under way to mark one year of abrogation of Article 370, while Prime Minister Imran Khan will address a session of the legislative assembly of Pakistan-occupied Kashmir (referred to as Azad Kashmir by Pakistan).

Alvi claimed, “We will keep our peaceful struggle but the Muslims of Kashmir and India are at end of their patience. India must take cognisance of this matter. Kashmiris should not feel [sic] them alone. We are their ambassadors. We will keep up their freedom struggle and will rest only after their liberation."

Alvi alleged the "military siege" in Jammu and Kashmir had inflicted financial losses amounting to $4 billion on the Kashmiri people.

Alvi then claimed India had taken inspiration from Israel. "India has learned how to change the demography from Israel," Alvi was quoted by Dawn as saying. He added India "learned from Israel the use of pellet guns, demographic apartheid through illegal settlements as the latter had been doing in Palestine".

Alvi accused India of not pursuing talks with Pakistan. "They signed the Simla Agreement with us in which it was decided that [both countries] will hold bilateral dialogue, but to date, India has refused to hold talks. Whenever the issue was raised on multilateral forums, India made excuses saying that it was a bilateral issue but they are not ready to talk," he was quoted by Dawn as saying.

Alvi claimed the press should be given free access in Jammu and Kashmir. "If the situation is peaceful, then press should have complete freedom to report from the occupied region," Alvi was quoted as saying by Dawn.