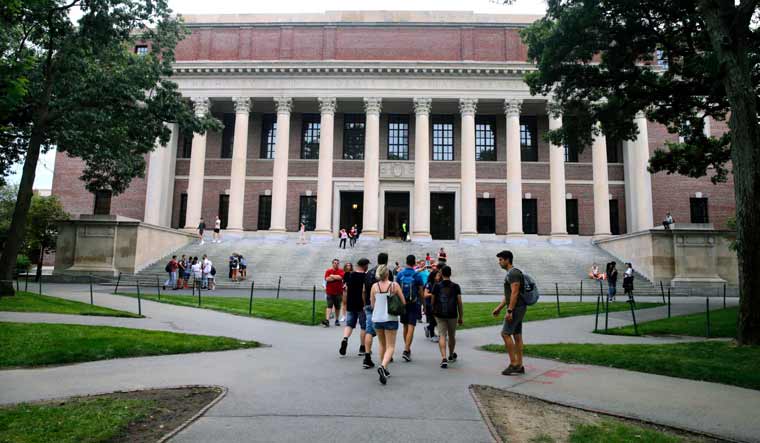 Less than two weeks after the Donald Trump administration rescinded a controversial rule that would have required foreign students pursuing online courses to leave the US, the saga of 'remote only' learning has taken another twist.

On Friday, the Immigration and Customs Enforcement (ICE) issued updated guidance that stated new international students will not be allowed entry to the US for the fall semester if their courses were fully online.

The updated guidance was listed in a frequently asked questions guidance broadcast issued by ICE. The guidance states "new or initial non-immigrant students who intend to pursue a full course of study that will be conducted completely online will likely not be able to obtain an F-1 or M-1 visa to study in the United States". F-1 visas are for students planning to pursue academic courses and M-1 visas for those seeking vocational courses.

The updated rule does not apply to students already having visas and pursuing online courses in the US.

"Traditionally—when there's not a pandemic—international students have been barred from taking more than one online course each semester. ICE allowed foreign students to stay in the US when classes went online in March but has feuded with universities about what to do about students now that colleges are again going online this fall, as the pandemic persists," USA Today reported.

The new guidance means new foreign students intending to study in the US would need to enrol in an institution offering at least "some in-person" classes even if their predecessors are pursuing only online courses. "ICE did say new international students would likely be able to enrol at universities that were offering a mixture of in-person and online classes, and they can stay in the country if their college switches to online-only instruction in the middle of the semester," USA Today reported.

The new rule is expected to spark another round of feuding between universities and the Trump administration as the fall semester nears. When ICE had announced a new rule barring entry to all students pursuing online courses, universities such as Harvard and MIT had sued the government, following which it changed course.

International students, of whom there are about 1.1 million in the US, contributed approximately $45 billion to the US economy in 2018, according to US Department of Commerce.