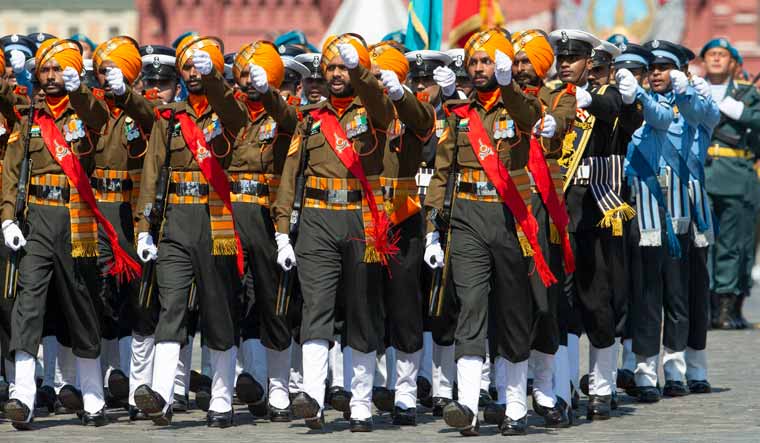 On Wednesday, Defence Minister Rajnath Singh was present at the parade marking the 75th anniversary of the Soviet victory against Nazi Germany in World War II, as a tri-services contingent from the Indian Army, Indian Navy and Indian Air Force participated in a parade on Moscow’s Red Square, along with contingents from 11 other countries including China.

The parade saw approximately 14,000 troops take part, showcasing around 200 pieces of military hardware both modern and from World War II.

Rajnath Singh tweeted praising the Armed Forces’ display, “Attending the Victory Day Parade at Red Square in Moscow today to commemorate the 75th Anniversary of Victory of the Soviet People in the great Patriotic War of 1941-1945. I am proud that a Tri-Service contingent of the Indian Armed Forces is also participating in this parade.”

“Impressive turnout of the Tri-Service contingent of the Indian Armed Forces at the Victory Day Parade in Moscow is indeed an extremely proud and happy moment for me,” he added.

On Tuesday, Singh told the press that it was an honour to see an Indian military contingent march at the historic event. “As we remember and pay tribute to the immense sacrifice of the Russian people for victory in the Second World War. Indian soldiers participated in the war effort in the millions and suffered immense casualties. Many of them were part of the war efforts to provide assistance to the Soviet Army. Therefore, it is a great honour that an Indian Military contingent will be marching in the Red Square tomorrow. This is a sign of everlasting friendship between the armed forces of both our countries,” he said.

The event took place despite concerns that it would be unsafe to do so given the ongoing coronavirus pandemic. Originally slated to be held on May 9, the date of the Nazi surrender, it was postponed to June 24—the date of the original Victory Day parade in Moscow in 1945.

Russian Deputy Prime Minister Yury Borisov welcomed India’s decision to participate nonetheless. "We highly appreciate the decision of the Indian Side despite current circumstances not to cancel participation of their military personnel in celebrations on the Red Square."

Singh is the first senior union minister to undertake a foreign visit in four months as international travels were restricted due to the coronavirus pandemic.

Singh travelled by an Indian Air Force aircraft, while strictly following all laid precautions against the coronavirus infection.

On Tuesday, Borisov visited Singh in his hotel, where the two reviewed the defence relationship between India and Russia.

"My discussions were very positive and productive. I have been assured that ongoing contracts will be maintained and not just maintained, in a number of cases will be taken forward in a shorter time. All our proposals have received positive responses from the Russian side. I am fully satisfied with my discussions," Singh said, indicating the timely delivery of the S-400 missile defence systems to India.

In October 2018, India had signed a $5 billion deal with Russia to buy five units of the S-400 air defence missile systems, notwithstanding warning from the Trump administration that going ahead with the contract may invite US sanctions.

Kyrgyzstan President Sooronbay Jeenbekov, who arrived in Moscow on Tuesday, was unable to attend the parade and left the following day after a member of his contingent was found to have tested positive for the coronavirus. “The president himself is fine,” the Kyrgyz embassy said.