BeiDou: How a satellite launch has made China's military 'independent' 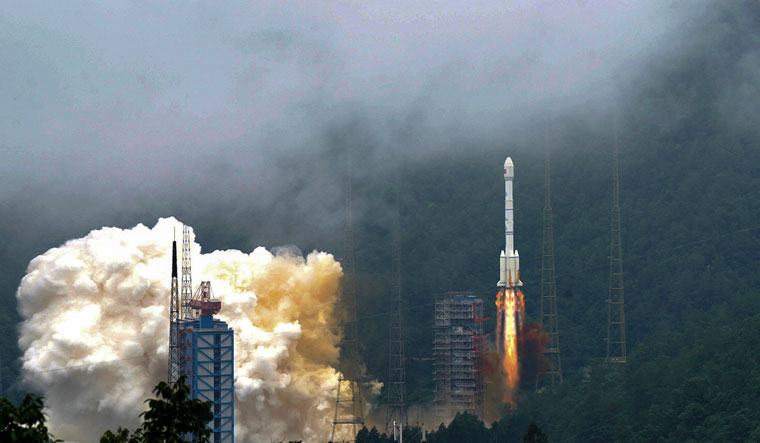 China on Tuesday launched the last satellite of its BeiDou navigation system, which is a rival to the ubiquitous US Global Positioning System (GPS).

BeiDou is one of four global satellite navigation networks, alongside the US GPS, Russia's GLONASS and the EU's Galileo.

The last BeiDou satellite was launched on Tuesday morning from the Xichang Satellite Launch Centre in southwest China's Sichuan Province. The satellite, the 55th in the family of BeiDou that means "Big Dipper" in Chinese, was successfully sent into space by a Long March-3B carrier rocket, according to the China Satellite Navigation Office.

The first BeiDou satellite was launched in 2000, providing positioning, navigation, timing and messaging services to domestic users in China. Subsequent launches saw BeiDou coverage increase to the Asia-Pacific region by 2012. When complete, BeiDou’s location services would be accurate down to 10cm in the Asia-Pacific, compared with GPS’s 30cm range.

BeiDou started providing global navigation services by late 2018. The satellite launched on Tuesday was the last in the series of 30 BDS-3 satellites. Compared with previous generations of the BeiDou satellites, the BDS-3 constellation has 30 satellites on three different orbit planes—three at the GEO, three at the inclined geosynchronous orbits and 24 at the medium-Earth orbit—providing increased bandwidth and accuracy.

The market for global satellite navigation services is expected to be worth over $108.6 billion by 2025. In 2019, China's state-run Xinhua news agency reported that the value of China's satellite navigation industry is expected to surpass $57.9 billion in 2020. Xinhua then reported, "FindNow, a satellite-accelerated location service supporting the BDS, has more than 300 million users from over 200 countries and regions."

China's Global Times reported on Tuesday, "BeiDou has been supporting dozens of businesses and public sectors in China, ranging from transportation and agriculture to electric power transmission and fisheries, and tens of millions of BeiDou-enabled terminal devices have been sold and are in use. In the field of transportation, BDS has been widely used in the monitoring and management of priority transportation, highway infrastructure safety, port scheduling and real-time high-precision positioning."

But it is what Global Times left unsaid that should worry China's military rivals such as the US, India and Japan.

In a recent report, US outlet CNBC noted that the completion of the BeiDou system means China is 'independent' of the US GPS. "The (Chinese) military now has a system it can use independent of the US GPS system," Andrew Dempster, director of the Australian Centre for Space Engineering Research, told CNBC. The US can disrupt GPS signals in the event of conflict. In fact, one of the main promoters of the BeiDou project in the 1990s was the Chinese military, which wanted to reduce dependence on GPS, which is run by the US Air Force.

BeiDou would improve the targeting and guidance of China's weapons, according to experts. “BeiDou was obviously designed a few decades after GPS, so it has had the benefit of learning from the GPS experience. It has some signals that have higher bandwidth, giving better accuracy. It has fewer orbit planes for the satellites, making constellation maintenance easier," Dempster recently told Reuters.

A report by the US-China Economic and Security Review Commission in January 2017 noted "China is almost certainly equipping its ballistic and cruise missiles to operate with both GPS and BeiDou... PLA operators could switch to BeiDou to guide a missile to its target if GPS were denied, and China would also be able to attack an adversary’s access to GPS without disrupting its own capabilities. The PLA has likely also been using BeiDou for positioning and manoeuvring, friendly force tracking and secure communications since the late 2000s."

Pakistan is the first country to have been given access to the 'unrestricted' version of BeiDou. US outlet Popular Science reported in March that Pakistan had incorporated BeiDou guidance into its Ra'ad-2 cruise missile, which was tested in February.