The government's containment of COVID-19 could work in Rajapaksa's advantage 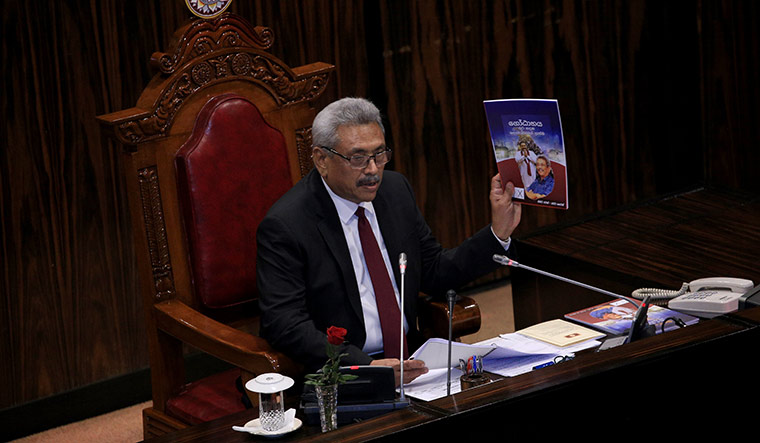 Besides an economic challenge, as well as the challenge of battling the COVID-19 pandemic, Sri Lanka also faces a challenge of the constitutional kind, as the country is set to go to polls after the same were delayed twice—with a decision on the dates awaited later this week and elections likely in August.

“There is no Parliament,’’ said Jehan Perera, executive director, National Peace Council of Sri Lanka at a webinar organised by the Indian Council of World Affairs. “President Gotabaya Rajapaksa has the sole elected mandate.”

Earlier, the election commission held a mock poll in the southern Galle district to test adherance to COVID-19 health guidelines and its preparedness for the parliamentary polls.

The Chairman of the National Election Commission, Mahinda Deshapriyac said there will be five more mock polls to come, which will determine the likely time voters need to cast their vote, and help to formulate guidelines for a safe voting process.

Sri Lanka, so far, had managed to successfully contain the spread of the coronavirus., with just under 2,000 cases and a death toll of 11.

One of the concerns Perara pointed out is that this crisis comes at the time when the elections are yet to be scheduled, leading to no “honest discussion” taking place on the issue. The media, whether state-run or private, has backed the Rajapaksa government. “The government has the upper hand,” he said when it came to presenting the picture of the handling of the situation.

With there being no Parliament in session—even beyond the stipulated deadline of three months according to the constitution—it was leading concerns of the “legitimacy of Parliament.” Especially, as he pointed out that the money spent by the government needed Parliamentary approval.

“We are seeing a superstructure formed,” he said referring to the task-force formed by the President Gotabaya Rajapaksa to deal with drugs etc, which he had appointed former military personnel. “We don’t know how deep it will be. I don’t see it as militarisation. I don’t think we will head for military rule…but undermining of the civilian institutions. I hope more consultation will happen.”

The handling of the COVID crisis, however, would certainly be an election plank, experts felt.

“The pandemic couldn’t have come at a worse time,” said Nisha Arunatilake, director of research, Institute of Policy Studies. “Earlier there was the Easter Bombings.’’ Now, tourism is non-existent. “Investments were down,” she said. Foreign investors had left the country. The economic growth was 3.3 per cent in 2018. In 2019, it was 2.3 per cent. “We need foreign exchange,” she said. “Exports are down.”

For the most part, the government’s handling of the pandemic seems to have been well-received in Sri Lanka. “They put in strident measures after the second COVID-19 case came up,” she said. The track and tracing have been “good”—courtesy the military which has been roped in.

It will be advantage Rajapaksa in the elections, feels S.Y Surendra Kumar, associate professor, Department of Politics Science, Bangalore University. What will the impact be on India?

“The Indian government has made it clear that they will be willing to deal with any regime. The relationship will remain unchanged. Sri Lanka is an important factor in Indian foreign policy,” he says.