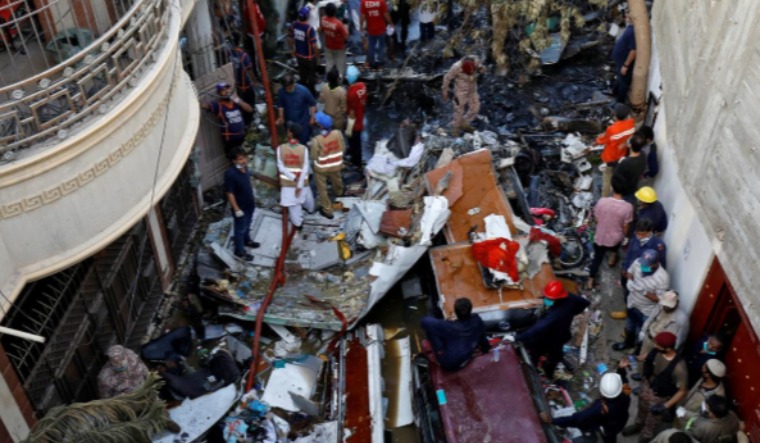 Health officials in Sindh province of Pakistan have confirmed that 97 people died in the crash of a Pakistan International Airlines A320 in Karachi on Friday.

Pakistan's Dawn newspaper reported that two people on board the flight had survived the crash and were in stable condition. "Meeran Yousuf, the media coordinator for the Sindh health minister, confirmed... that two passengers had survived and were brought to hospitals. She identified the survivors as Zubair and Zafar Masood, who is the president of Bank of Punjab," Dawn reported.

PIA flight PK 8303 was flying from Lahore to Karachi with 91 passengers and eight crewmembers. The A320 crashed in Karachi's Model Colony, near the Jinnah International Airport. Faisal Edhi of the Edhi Welfare Trust told PTI around 25 to 30 residents whose houses were damaged by the plane crash have also been taken to the hospital, mostly with burn wounds. The aircraft wings during the crash hit the houses in the residential colony. "At least 25 houses have been damaged in this incident,” Edhi said.

It is yet unclear whether the dead included people on the ground.

According to a PIA official, the captain informed the air traffic control that he was having problems with the landing gear before the aircraft disappeared from the radar.

Pakistan's Dunya News said it had obtained a recording of the conversation between the pilot and air traffic control. In it, the pilot says they have "lost two engines". Several seconds later, he calls "Mayday, Mayday, Mayday" and there is no further communication.

PIA chief executive Air Vice Marshal Arshad Malik said the pilot had told traffic control that the plane was experiencing "technical difficulties". Malik rejected reports that the plane had problems even before flying. Talking to the media, he said the aircraft was completely safe and sound.

“The real cause of the mishap will be known after inquiry, which will be free and fair and it will be provided to media,” he said.

Malik said that the entire operation will take two to three days to complete.

Pakistan has set up a four-member board of inquiry to know the cause of the crash.