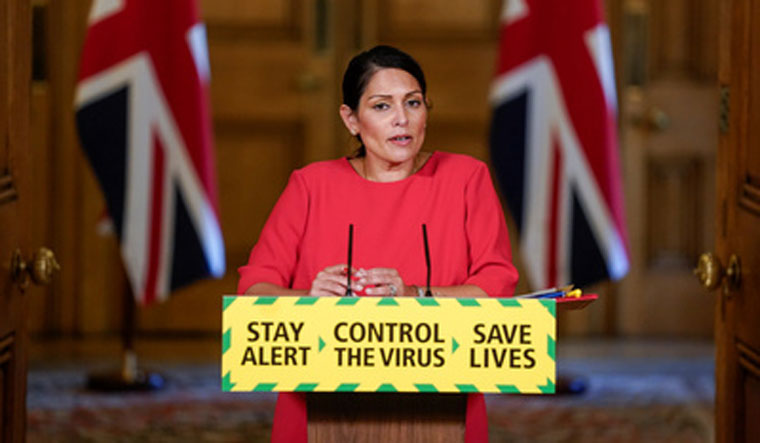 The UK government announced tough new measures on Friday for international travellers coming into the country as the coronavirus pandemic lockdown is gradually eased, including 14-day mandatory quarantines and possible fines for a breach.

UK Home Secretary Priti Patel, who made the announcement at the daily Downing Street briefing in London, said the new measures will come into force from June 8 with penalties of up to £1,000 for quarantine breaches enforced from mid-June.

"We are introducing these new measures now to keep the transmission rate down and prevent a devastating second wave," said Patel.

I fully expect the majority of people will do the right thing and abide by these measures. But we will take enforcement action against a small reckless minority of people who endanger the safety of others, she said.

The Indian-origin Cabinet minister said spot checks would be carried out by the UK Border Force to ensure travellers abide by the rules, with those failing to comply facing refusal of entry to the UK.

Under the plans, all arriving passengers will be required to fill a Contact Locator Form to provide contact and travel information so they can be contacted if they, or someone they may have been in contact with develops the disease.

They will then be required to self-isolate for 14 days, the incubation period of the coronavirus, and could be contacted regularly throughout this period by health officials to ensure compliance.

The Home Office said a breach of self-isolation would be punishable with a £1,000 pounds fixed penalty notice in England or potential prosecution and an unlimited fine.

The level of the fine could increase if the risk of infection from abroad increases and the devolved administrations of Scotland, Wales and Northern Ireland will set out their own enforcement approaches.

Failure to complete the form is also punishable by a £100 fixed penalty notice.

Removal from the country would be considered as a last resort for foreign nationals who refuse to comply with these public health measures.

In reference to some criticism around the new rules being imposed too late, Home Office Chief Scientific Adviser John Aston said that while there has been significant community transmission of the virus within the UK the impact of putting in place additional border restrictions would have been negligible to the spread of the virus.

As the number of infections within the UK drops, we must now manage the risk of transmissions being reintroduced from elsewhere, he said.

As part of the plans, road hauliers and medical officials entering the country in relation to work to combat the pandemic would be exempt, as well as those arriving from the common travel area of the Republic of Ireland.

Seasonal agricultural workers will be expected to self-isolate on the property where they are working.

Any other passengers arriving in the UK by plane, ferry or train would need to provide UK Border Force officials with an address where they will self-isolate, otherwise, accommodation will be arranged by the government.

The Opposition Labour Party has backed the plans, but shadow health secretary Jonathan Ashworth said there were "lots of questions as to why we didn't do this sooner".

"I would urge the government to get on with it and give us the details about how it's going to work in practice," he said.

Airlines have warned quarantine measures could make an already critical situation worse for them, with air travel grounding to a near-halt as a result of the lockdown measures imposed worldwide to curb the spread of the deadly virus.

The British government's current guidance recommends international travel only when absolutely necessary, and states that nobody should travel if they display any coronavirus symptoms. There have so far been no quarantine requirements for travellers from abroad, with the government saying it is deemed necessary only now as the rate of infection within the country is brought into control and there is a need to prevent a second wave of infections coming in from overseas.

The rate of infection, so-called R rate, has been kept under the required rate of 1, with UK Health Secretary Matt Hancock saying that the country is ready to move to level three of a five-level test set by the government to ease the country out of lockdown.